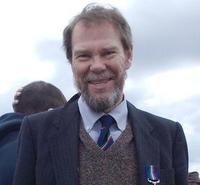 Born
in The United Kingdom
December 02, 1952
Website
http://georgemeegan.wordpress.com/
Genre
Travel
edit data
George Meegan is a British long-distance walker best known for his unbroken walk of the entire Western Hemisphere from the southern tip of South America to the northernmost part of Alaska at Prudhoe Bay.
He has appeared often in the press including the Today Show three times, CBS Morning News and on Larry King Live. Meegan lives Internationally and has a wife, Yoshiko, in Japan. They have two children.
He ran as an Independent candidate for the Gillingham and Rainham constituency for the 2010 General Election.

“In this land of great opportunity and few roads (in most regions the Alaskan Highway is the only real road), the immense distances can only be reasonably handled by air, in fact, half of all the private aircraft in the world are registered in Alaska. Near any urban center, such as they were, I couldn't look up into the sky without seeing at least one fixed wing clawing itself into the sky.”
― George Meegan, The Longest Walk: An Odyssey of the Human Spirit
2 likes
Like

“In fact, my itinerary, as I have hinted before, was influenced not so much by Tschiffely's journey--I hadn't even read his book--as by Snow's. Snow's original plan was not to stop after completing South America but to continue either straight up to Alaska or northeastward to Washington, D.C. My insane plan was to do both, thereby "completing" the Americas and by virtue of the extra distance gained by the detour to the east coast, recording the longest unbroken walk of all time.”
― George Meegan, The Longest Walk: An Odyssey of the Human Spirit
1 likes
Like

“Potosi, at over thirteen thousand feet, is the highest city in the world, and it is inconceivable that anyone would ever bother to build, much less occupy, a city at such an altitude were it not for the fabulous riches of Cerro Rico. Indeed, at one time things were really humming here--French wines, Chinese silks, posh whores, etc.--Potosi's university was founded well before the Pilgrims ever thought to set sail, and in 1613 the population was a hundred twenty thousand, equal to London's.”
― George Meegan, The Longest Walk: An Odyssey of the Human Spirit
1 likes
Like


Is this you? Let us know. If not, help out and invite George to Goodreads.