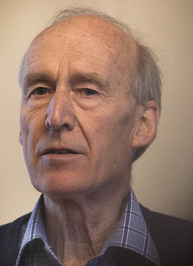 Born
The United Kingdom
Genre
Science
Influences
Ernst Mach Ernst Mach ...more
edit data
Since receiving his PhD degree on the foundations of Einstein's general theory of relativity at the University of Cologne in 1968, Barbour has supported himself and his family without an academic position, working part-time as a translator. He has research interests in quantum gravity and the history of science.

“The mature brain is a time capsule. History resides in its structure.”
― Julian B. Barbour, The End of Time: The Next Revolution in Our Understanding of the Universe
tags: memory
9 likes
Like

“You are the music of the spheres heard from the particular vantage point that is you.”
― Julian Barbour
7 likes
Like

“A radical alternative put forward by Newton's rival Leibniz provides my central idea. The world is to be understood, not in the dualistic terms of atoms (things of one kind) that move in the framework and container of space and time (another quite different kind of thing), but in terms of more fundamental entities that fuse space and matter into the single notion of a possible arrangement, or configuration, of the entire universe. Such configurations, which can be fabulously richly structured, are the ultimate things. There are infinitely many of them; they are all different instances of a common principle of construction; and they are all, in my view, the different instants of time. In fact, many people who have written about time have conceived of instants of time in a somewhat similar way, and have called them 'nows'. Since I make the concept more precise and put it at the heart of my theory of time, I shall call them Nows. The world is made of Nows.”
― Julian Barbour
1 likes
Like

Is this you? Let us know. If not, help out and invite Julian to Goodreads.