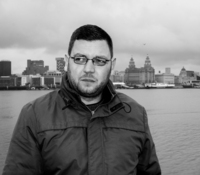 Part psychological thriller, part police procedural, his books follow the detective pairing of DI David Murphy and DS Laura Rossi. The novels are set in Liverpool, bringing the city to life in a dark and terrifying manner...with just a splash of Scouse humour.

"A darkly impressive novel... disturbing and intelligent." The Times

"A chilling début from a writer to watch..." Mar Luca Veste is a writer of Italian and Liverpudlian heritage, married with two young daughters, and one of nine children. He studied psychology and criminology at university in Liverpool. He is the author of the Murphy and Rossi series, which includes DEAD GONE, THE DYING PLACE, BLOODSTREAM, and THEN SHE WAS GONE.

Part psychological thriller, part police procedural, his books follow the detective pairing of DI David Murphy and DS Laura Rossi. The novels are set in Liverpool, bringing the city to life in a dark and terrifying manner...with just a splash of Scouse humour.

"A darkly impressive novel... disturbing and intelligent." The Times

"A chilling début from a writer to watch..." Mark Billingham

"A major new talent on the crime scene." Eva Dolan

He is also the editor of the Spinetingler Award nominated charity anthology 'Off The Record', and co-editor of 'True Brit Grit', also an anthology of short stories for charity.

He is a former civil servant, actor, singer and guitarist (although he still picks it up now and again), and now a full-time writer.

He can be found at www.lucaveste.com and on twitter @LucaVeste ...more

I just listened to the first two books in the Murphy/Rossi series and I LOVED them! And I really liked the performance by Jonathan Keeble. Unfortunately I can't find an audiobook of "Bloodstream". Is there one in the makes?
Luca Veste Hi!

Thank you so much for listening. I really appreciate it. Audiobook for Bloodstream will be available later this year.

Thank you so much for listening. I really appreciate it. Audiobook for Bloodstream will be available later this year.

“It is as if the world shifted in its sleep, and one of its ideas escaped and became real.”

Years and years ago (or 2011, if you want to be picky), I started off this blog with reviews and interviews. I had no intention of writing myself and was merely interested in talking about books I liked (or in rare instances didn’t like). Fast forward a few months and I was writing short stories galore and starting a novel.

I have zero self-control.

The first book I reviewed was Deadfolk by Charlie

Luca is currently reading
You
by Zoran Drvenkar
bookshelves: currently-reading

“It's your imagination, and anything can happen there.”
― Luca Veste, It Never Leaves You
0 likes
Like

“The first part of my plan is to write until I die.

The second part is to not die.”
― Will Carver
6 likes
Like

“Have you ever had somebody grip you with a passion you never thought existed outside the fucking movies? As though they found you the most precious thing in the world? I felt it then, and couldn't believe that somebody would actually want me that much. I don't believe in Heaven as a place, but I sometimes think that if a person could write down how I felt at just that moment - if they could describe it perfectly - then that sentence would be something like Heaven to me. And as a final resting place, I'd be happy to have my name shrunk down and rested, invisibly, on the collar of the full stop at the end.”
― Steve Mosby, The Third Person
tags: heaven, inspirational, passion, perfect-moment
10 likes
Like

“Clouds don't matter much at night-time. It's only when there's a sun for them to cover that the world falls dark. ”
― Steve Mosby, The Third Person
6 likes
Like

Claire McGowan
author of
What You Did

Hi, Luca, thanks for friending me on Goodreads. My new crime novel, Death Comes Calling, is now available from Kindle ebook and paperback form, so please feel free to take a look via the Amazon UK link at the bottom.

A successful career woman is found dead on the floor of her North London kitchen with her throat brutally slashed. Beside the body lies a half-open razor with a single droplet of blood at the tip of an otherwise pristine blade.

However, the forensics prove this razor can’t be the murder weapon, and when another successful career woman is found murdered a few days later, again in her kitchen, again with her throat cut and again with a blood-tipped half-open razor placed beside her body, Detective Chief Inspector John Gore of the Metropolitan Police fears he has a potential serial killer on his hands.

As the body count rises the pressure is mounting on Gore to quickly find and stop the killer.

Meanwhile someone is sending him taunting notes, each headed, Death Comes Calling, and Gore begins to realise the killer is playing mind games not just with the police, but with him personally. The question is…why?

Cheers Luca,for accepting my friendship.
I look forward to reading your book 'Dead gone'.
Best wishes to you and your family.

Luca,
Thanks for acepting my friendship request here on Goodreads. I am delighted to have won a copy of your novel 'Dead Gone' {through a first-read giveaway}, which i am looking forward to reading. x