,
Discover new books on Goodreads
See if your friends have read any of Herbert Spencer's books 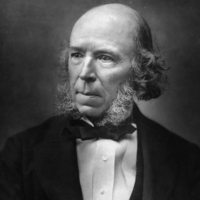 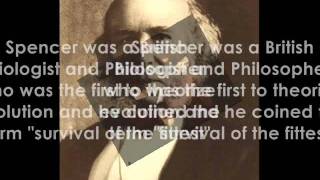 Spencer developed an all-embracing conception of evolution as the progressive development of the physical world, biological organisms, the human mind, and human culture and societies. He was "an enthusiastic exponent of evolution" and even "wrote about evolution before Darwin did." As a polymath, he contributed to a wide range of subjects, including ethics, religion, anthropology, economics, political theory, philosophy, literature, biology, sociology, and psychology. During his lifetime he achieved tremendous authority, mainly in English-speaking academia. "The only other English philos Herbert Spencer was an English philosopher, biologist, anthropologist, sociologist, and prominent classical liberal political theorist of the Victorian era.

Spencer developed an all-embracing conception of evolution as the progressive development of the physical world, biological organisms, the human mind, and human culture and societies. He was "an enthusiastic exponent of evolution" and even "wrote about evolution before Darwin did." As a polymath, he contributed to a wide range of subjects, including ethics, religion, anthropology, economics, political theory, philosophy, literature, biology, sociology, and psychology. During his lifetime he achieved tremendous authority, mainly in English-speaking academia. "The only other English philosopher to have achieved anything like such widespread popularity was Bertrand Russell, and that was in the 20th century." Spencer was "the single most famous European intellectual in the closing decades of the nineteenth century" but his influence declined sharply after 1900; "Who now reads Spencer?" asked Talcott Parsons in 1937.

Spencer is best known for coining the expression "survival of the fittest", which he did in Principles of Biology (1864), after reading Charles Darwin's On the Origin of Species. This term strongly suggests natural selection, yet as Spencer extended evolution into realms of sociology and ethics, he also made use of Lamarckism. ...more

“The ultimate result of shielding men from the effects of folly is to fill the world with fools.”
― Herbert Spencer
tags: folly
64 likes
Like

“[L]et us not overlook the further great fact, that not only does science underlie sculpture, painting, music, poetry, but that science is itself poetic. The current opinion that science and poetry are opposed is a delusion. ... On the contrary science opens up realms of poetry where to the unscientific all is a blank. Those engaged in scientific researches constantly show us that they realize not less vividly, but more vividly, than others, the poetry of their subjects. Whoever will dip into Hugh Miller's works on geology, or read Mr. Lewes's “Seaside Studies,” will perceive that science excites poetry rather than extinguishes it. And whoever will contemplate the life of Goethe will see that the poet and the man of science can co-exist in equal activity. Is it not, indeed, an absurd and almost a sacrilegious belief that the more a man studies Nature the less he reveres it? Think you that a drop of water, which to the vulgar eye is but a drop of water, loses anything in the eye of the physicist who knows that its elements are held together by a force which, if suddenly liberated, would produce a flash of lightning? Think you that what is carelessly looked upon by the uninitiated as a mere snow-flake, does not suggest higher associations to one who has seen through a microscope the wondrously varied and elegant forms of snow-crystals? Think you that the rounded rock marked with parallel scratches calls up as much poetry in an ignorant mind as in the mind of a geologist, who knows that over this rock a glacier slid a million years ago? The truth is, that those who have never entered upon scientific pursuits know not a tithe of the poetry by which they are surrounded. Whoever has not in youth collected plants and insects, knows not half the halo of interest which lanes and hedge-rows can assume. Whoever has not sought for fossils, has little idea of the poetical associations that surround the places where imbedded treasures were found. Whoever at the seaside has not had a microscope and aquarium, has yet to learn what the highest pleasures of the seaside are. Sad, indeed, is it to see how men occupy themselves with trivialities, and are indifferent to the grandest phenomena—care not to understand the architecture of the universe, but are deeply interested in some contemptible controversy about the intrigues of Mary Queen of Scots!—are learnedly critical over a Greek ode, and pass by without a glance that grand epic... upon the strata of the Earth!”
― Herbert Spencer
44 likes
Like