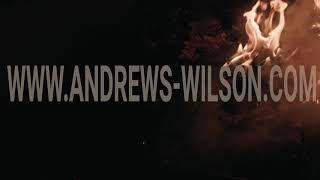 Danielle The Book Huntress (Back to the Books)

- SONS OF VALOR, a TIER ONE shared world series from Blackstone Publishing

- THE SHEPHERDS, a faith-based, supernatural action series from Tyndale House

You can find him online at:

Please "Follow" his Amazon page to stay informed about all his new rel Brian Andrews is a US Navy veteran, Park Leadership Fellow, and former submarine officer with a psychology degree from Vanderbilt and a masters in business from Cornell University. He is the author of three critically acclaimed high-tech thrillers: Reset, The Infiltration Game, and The Calypso Directive, and co-authors the Wall Street Journal and #1 Amazon best-selling TIER ONE thriller series with Jeffrey Wilson.

- SONS OF VALOR, a TIER ONE shared world series from Blackstone Publishing

- THE SHEPHERDS, a faith-based, supernatural action series from Tyndale House

You can find him online at:

Please "Follow" his Amazon page to stay informed about all his new releases! ...more

We talk with the talented Austin Camacho about RED SPECTER in ITW’s #BigTheThrill Magazine Nov 19 Issue. Check it out at: 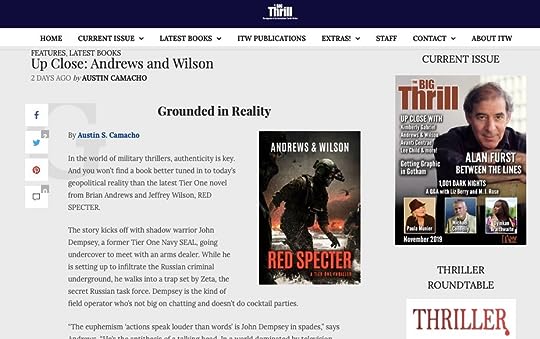 “When ego trumps fidelity, the end result is inevitably betrayal—betrayal of country, of kith or kin, or of self.”
― Brian Andrews
3 likes
Like

“The best lie is one so exquisite and so tempting that both the deceiver and the listener yearn for it to be true.”
― Brian Andrews, Tier One
3 likes
Like

“With Petrov, everything is a zero-sum game—for Russia to rise, America must fall. Everything he’s done over the past decade has been an effort to sully and tarnish the reputation of Western democracies. Promoting Brexit, actively trying to break up the EU and NATO, turning Italy against France, stoking the fires of partisanship in the United States. And while we turn inward, trying to tame and manage the chaos Russia unleashed in our house, Petrov is systematically moving his chess pieces all over the board.”
― Brian Andrews, Red Specter
1 likes
Like

“Life is a suicide mission.”
― Orson Scott Card
9 likes
Like

“There were times—not many, but a few—when Jon Snow was glad he was a bastard.”
― george rr martin
tags: game-of-thrones
28 likes
Like

“Whereas it appeareth that however certain forms of government are better calculated than others to protect individuals in the free exercise of their natural rights, and are at the same time themselves better guarded against degeneracy, yet experience hath shewn, that even under the best forms, those entrusted with power have, in time, and by slow operations, perverted it into tyranny; and it is believed that the most effectual means of preventing this would be, to illuminate, as far as practicable, the minds of the people at large, ....whence it becomes expedient for promoting the publick happiness that those persons, whom nature hath endowed with genius and virtue, should be rendered by liberal education worthy to receive, and able to guard the sacred deposit of the rights and liberties of their fellow citizens, and that they should be called to that charge without regard to wealth, birth or accidental condition of circumstance.”
― Thomas Jefferson, Writings: Autobiography / Notes on the State of Virginia / Public and Private Papers / Addresses / Letters
tags: apathy, complacency, corruption, decline, misgovernment, political-philosophy
263 likes
Like

“The story so far:
In the beginning the Universe was created.
This has made a lot of people very angry and been widely regarded as a bad move.”
― Douglas Adams, The Restaurant at the End of the Universe
tags: humor, scifi
22340 likes
Like

“When ego trumps fidelity, the end result is inevitably betrayal—betrayal of country, of kith or kin, or of self.”
― Brian Andrews
3 likes
Like

Dennis Lehane
author of
Shutter I...

Grant Blackwood
author of
Under Fire