,
Discover new books on Goodreads
See if your friends have read any of Cynthia Kadohata's books 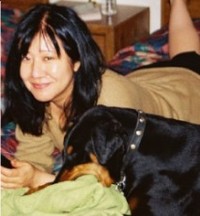 · 49,172 ratings · 6,562 reviews · 19 distinct works • Similar authors
More books by Cynthia Kadohata…
Quotes by Cynthia Kadohata  (?)
Quotes are added by the Goodreads community and are not verified by Goodreads. (Learn more)
“My sister had taught me to look at the world that way, as a place that glitters, as a place where the calls of the crickets and the crows and the wind are everyday occurrences that also happen to be magic.”
― Cynthia Kadohata, Kira-Kira
113 likes
Like

“The blue of the sky is one of the most special colors in the world, because the color is deep but see-through both at the same time.”
― Cynthia Kadohata, Kira-Kira
tags: blue, japan, japanese, kirakira, life, nature, sky
29 likes
Like

“It was hard to stay angry when I felt so sad. I would rather have felt angry, but instead, all I could do was sob. Even though people had been coming over all day, the house seemed so lonely that I couldn't stand it.
The room grew somewhat dimmer. I didn't move as it grew dimmer still. Then, with a start, I hurried outside and ran to the alley in back of our house. Through a break between the buildings, I saw that the sun hung low over the horizon. I watched it until it started to hide between two trees in the distance. Then I climbed on a car and watched until only half of the sun was visible, and then a quarter, and then I felt a huge sickening panic inside of me and ran as hard as I could to a ladder I saw down the alley. I rushed up the ladder and climbed on the roof of somebody's garage. I saw the sun again, a quarter of it, and then a slice, and then it disappeared, the last time ever that the sun would set on a day my sister had lived.”
― Cynthia Kadohata, Kira-Kira
26 likes
Like

Now that we have a Mock Newbery medal we can pick an honor book.

Which book would you choose to receive an honor award for our Mock Newbery?

The Thing About Luck by Cynthia Kadohata
10 votes 10.8%

The Year of Billy Miller by Kevin Henkes
5 votes 5.4%

Is this you? Let us know. If not, help out and invite Cynthia to Goodreads.