,
Discover new books on Goodreads
See if your friends have read any of Mikita Brottman's books 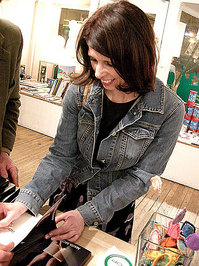 Brottman also writes for mainstream and counterculture journals and magazines. Her work has appeared in such diverse venues as The Los Angeles Times, The Huffington Post, The Chronicle of Higher Education, Bad Subjects, The Fortean Times, Headpress, and Popmatters, where her column, "Sub Rosa", ran from January 2007 to July 2009. Her essays have also appeared in a number of books and anthologies.

She is the author of the cult film books Meat is Murder and Hollywood Hex, as well as books on psychoanalysis, critical theory and contemporary popular culture. Her most recent book, The Solitary Vice: Against Reading (Counterpoint, 2008) was selected as one of the Best Books of 2008 by Publishers Weekly, who said: "Sharp, whimsical and impassioned, Brottman's look at the pleasures and perils of compulsive reading is itself compulsively readable and will connect with any book lover."

· 4,524 ratings · 1,012 reviews · 24 distinct works • Similar authors
More books by Mikita Brottman…
Quotes by Mikita Brottman  (?)
Quotes are added by the Goodreads community and are not verified by Goodreads. (Learn more)
“Should he give free reign to his desires, the bibliomaniac can ruin his life along with the lives of his loved ones. He'll often take better care of his books than of his own health; he'll spend more on fiction than he does on food; he'll be more interested in his library than in his relationships, and, since few people are prepared to live in a place where every available surface is covered with piles of books, he'll often find himself alone, perhaps in the company of a neglected and malnourished cat. When he dies, all but forgotten, his body might fester for days before a curious neighbor grows concerned about the smell.”
― Mikita Brottman
tags: bibliophiles, bibliophilia, books, libraries, reading
21 likes
Like

“To be invisible is to be free.”
― Mikita Brottman, An Unexplained Death: The True Story of a Body at the Belvedere
tags: invisibility, invisible
2 likes
Like

“The similarities between those who jump into wells, those who are thrown in, and those who lose their footing and fall are very great. The differences are slight.… If the victim was thrown in or fell in accidentally, the hands will be open and the eyes slightly open, and about the person he may have money or other valuables. But, if he was committing suicide, then his eyes will be shut and his hands clenched. There will be no valuables on the body. Generally, when someone deliberately jumps into a well, they will enter feet first. If the body is found to have gone in head first, it is probable that the victim was being chased or was thrown in by others.”
― Mikita Brottman, An Unexplained Death: The True Story of a Body at the Belvedere
0 likes
Like

Is this you? Let us know. If not, help out and invite Mikita to Goodreads.