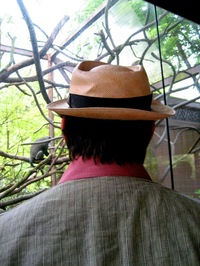 Things to keep in mind (The secret of what we know)

Any of the early steps in its spread could have been either accidental or deliberate, but I just have trouble getting interested in that. I mean, even suppose we were sure of every element of a conspiracy: that the lives of Africans and African Americans are worthless in the eyes of the United States; that gay men and drug users are held cheap where they aren’t actively hated; that the military de

“Violence; violence, and power, in the context of yet somebody else walking up to the groaning boards of fantasy’s eternal wedding feast, still laden with the cold meats from Tolkien’s funeral, and cheekily joining everyone who’s trying to send the whole thing smashing to the ground just to hear the noise all that crockery will make. —But! Also: genderfuck, hearts broken cleanly and otherwise, the City of Portland, Spenser, those moments in pop songs when the bass and all of the drums except maybe a handclap suddenly drop out of the bridge leaving you hanging from a slender aching thread of melody waiting almost dreading the moment when the beat comes back, and the occasional bit of swordplay.”
― Kip Manley
2 likes
Like

“Style and Structure are the essence of a book; great ideas are hogwash.”
― Vladimir Nabokov
9 likes
Like

“he is every assertion the fucking War has ever made-that we are meant for work and government, for austerity: and these shall take priority over love, dreams, the spirit, the senses and the other second-class trivia that are found among the idle and mindless hours of the day...
--Gravity's Rainbow”
― Thomas Pynchon
4 likes
Like

Indie Book Collective — 2976 members — last activity Oct 17, 2020 09:44AM
A group of indie authors, helping each other out and bringing new books to the world

Patrick Nielsen Hayden
author of
Some of t...

Barry Deutsch
author of
How Mirka...