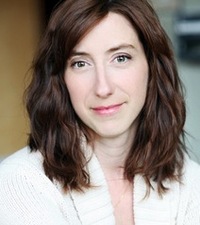 Twitter
fannybritiche
edit data
Fanny Britt is a Quebec playwright, author and translator. She has written a dozen plays (among them Honey Pie, Hôtel Pacifique and Bienveillance) and translated more than fifteen. She has also written and translated several other works of literature. Jane, the Fox and Me is her first graphic novel.

“The same thing happens every time- another hole opens up in my rib cage.
Hearing everything.
Hearing nothing.”
― Fanny Britt, Jane, the Fox, and Me
4 likes
Like

“Just like in Jane Eyre, the moral of the story would be 'never forget that you're nothing but a sad sausage.”
― Fanny Britt, Jane, the Fox, and Me
tags: jane-eyre, moral
3 likes
Like

“On the bus, I pull out my book.
It's the best book I've ever read, even if I'm only halfway through. It's called Jane Eyre by Charlotte Brontë, with two dots over the e.
Jane Eyre lives in England in Queen Victoria's time. She's an orphan who's taken in by a horrid rich aunt who locks her in a haunted room to punish her for lying, even though she didn't lie.
Then Jane is sent to a charity school, where all she gets to eat is burnt porridge and brown stew for many years. But she grows up to be clever, slender, and wise anyway.
Then she finds work as a governess in a huge manor called Thornfield, because in England houses have names. At Thornfield, the stew is less brown and the people less simple.
That's as far as I've gotten...
Diving back into Jane Eyre...
Because she grew up to be clever, slender and wise, no one calls Jane Eyre a liar, a thief or an ugly duckling again. She tutors a young girl, Adèle, who loves her, even though all she has to her name are three plain dresses. Adèle thinks Jane Eyre's smart and always tells her so.
Even Mr. Rochester agrees. He's the master of the house, slightly older and mysterious with his feverish eyebrows. He's always asking Jane to come and talk to him in the evenings, by the fire. Because she grew up to be clever, slender, and wise, Jane Eyre isn't even all that taken aback to find out she isn't a monster after all...
Jane Eyre soon realizes that she's in love with Mr. Rochester, the master of Thornfield. To stop loving him so much, she first forces herself to draw a self-portrait, then a portrait of Miss Ingram, a haughty young woman with loads of money who has set her sights on marrying Mr. Rochester.
Miss Ingram's portrait is soft and pink and silky.
Jane draws herself: no beauty, no money, no relatives, no future. She show no mercy. All in brown.
Then, on purpose, she spends all night studying both portraits to burn the images into her brain for all time.
Everyone needs a strategy, even Jane Eyre...
Mr. Rochester loves Jane Eyre and asks her to marry him.
Strange and serious, brown dress and all, he loves her.
How wonderful, how impossible.
Any boy who'd love a sailboat-patterned, swimsuited sausage who tames rabid foxes would be wonderful. And impossible.
Just like in Jane Eyre, the story would end badly.
Just like in Jane Eyre, she'd learn the boy already has a wife as crazy as a kite, shut up in the manor tower, and that even if he loves the swimsuited sausage, he can't marry her.
Then the sausage would have to leave the manor in shame and travel to the ends of the earth, her heart in a thousand pieces...
Oh right, I forgot.
Jane Eyre returns to Thornfield one day and discovers the crazy-as-a-kite wife set the manor on fire and did Mr. Rochester some serious harm before dying herself.
When Jane shows up at the manor, she discovers Mr. Rochester in the dark, surrounded by the ruins of his castle.
He is maimed, blind, unkempt.
And she still loves him.
He can't believe it.
Neither can I.
Something like that would never happen in real life.
Would it?
... You'll see, the story ends well.”
― Fanny Britt, Jane, the Fox, and Me
3 likes
Like

Which Hot Off the Press (New Release) should we read in January 2014?

Is this you? Let us know. If not, help out and invite Fanny to Goodreads.