Discover new books on Goodreads
See if your friends have read any of Matthew S. Williams's books 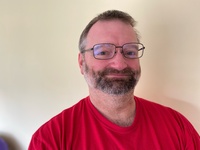 When I'm not writing, I'm practicing Taekwon-Do, or just enjoying life in BC with my wife and cat.

Check out my author profile on Amazon:

https://www.amazon.com/M I'm a science communicator and journalist who writes for Universe Today and a handful of other publications. I've written thousands of articles on the subjects of astronomy, space exploration, Earth science, and cosmology. I am also a lover of sci-fi and the classics - always have been, always will be!

When I'm not writing, I'm practicing Taekwon-Do, or just enjoying life in BC with my wife and cat.

Check out my author profile on Amazon:

Episode Twenty-Six of Stories from Space, “The Copernican Revolution,” is Now Live

This week’s episode focuses on the life and times of Nicolaus Copernicus, the famed Rennaissance Polish astronomer who proposed the heliocentric model of the Universe. The details of this model were presented in his magnum opus, On the Revolutions of the Heavenly Spheres, which Copernicus had published in 1543 when he was on his deathbed. While Copernicus is a household name and the basics of his

More of Matthew's books…
Quotes by Matthew S. Williams  (?)
Quotes are added by the Goodreads community and are not verified by Goodreads. (Learn more)
“There are no injuries that run so deep that one can't add insult to them and make them feel even worse.”
― Matthew S. Williams
tags: injuries, insult, pain, trauma
8 likes
Like

“It was unhealthy to get too attached. Such things were best reserved for people who had a life expectancy”
― Matthew S. Williams
tags: author, quotes, sci-fi
2 likes
Like

“When the universe presents unexpected gifts to those who feel undeserving, how else are they to react, except with sheer paranoia?”
― Matthew S. Williams
tags: gifts, luck, unexpected, universe
2 likes
Like

“When I began to write fiction that I knew would be published as science fiction, [and] part of what I brought to it was the critical knowledge that science fiction was always about the period in which it was written.”
― William Gibson
tags: fiction, sci-fi
9 likes
Like

“Until a man is twenty-five, he still thinks, every so often, that under the right circumstances he could be the baddest motherfucker in the world. If I moved to a martial-arts monastery in China and studied real hard for ten years. If my family was wiped out by Colombian drug dealers and I swore myself to revenge. If I got a fatal disease, had one year to live, and devoted it to wiping out street crime. If I just dropped out and devoted my life to being bad.”
― Neal Stephenson
tags: bad, bad-guy, bad-person, crime, humor, motherfucker, revenge
615 likes
Like

“The difference between stupid and intelligent people – and this is true whether or not they are well-educated – is that intelligent people can handle subtlety. ”
― Neal Stephenson, The Diamond Age: Or, a Young Lady's Illustrated Primer
366 likes
Like

“Ronald Reagan has a stack of three-by-five cards in his lap. He skids up a new one: "What advice do you, as the youngest American fighting man ever to win both the Navy Cross and the Silver Star, have for any young marines on their way to Guadalcanal?"

"Just kill the one with the sword first."

"Ah," Reagan says, raising his waxed and penciled eyebrows, and cocking his pompadour in Shaftoe's direction. "Smarrrt--you target them because they're the officers, right?"

"No, fuckhead!" Shaftoe yells. "You kill 'em because they've got fucking swords! You ever had anyone running at you waving a fucking sword?”
― Neal Stephenson, Cryptonomicon

“The future is already here – it's just not evenly distributed.

I don't want to argue with that Bill guy anymore about definitions because all I can do is point to a dictionary and if that isn't proof enough, he wins I guess because there will never be better proof. So I give up on that, I have no way to win when logic is ignored.

But I would like to point out how interesting it is that a user commenting in a thread about 1984 seems to be practicing doublethink. Refusing to acknowledge that his definition is incorrect even when confronted with so much evidence. Big Brother has just raised your chocolate ration from 30 grammes to 20 ;)

Judyta wrote: "Thank you for accepting my invitation :-)"
Hey, no problem, always interesting in swapping ideas! Especially with a fellow historian.

Thank you for accepting my invitation :-)