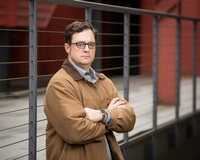 I do get "stuck" sometimes. There are afternoons when specifically the words won't come, however hard the story is churning. When that happens, I find a place where I can zone out, in the car on a drive, on an exercise machine or a walk, or just listening to music on headphones.(less)
flag
Can you tell us a two-sentence horror story?
Erick W Mertz Voted in the election. My vote did not count.
flag
See all 4 answers from Erick W Mertz…

Night On Earth: The Films Of Jim Jarmusch

1991 was a year of blockbusters in cinema, both bland and grand. The second installment of the Terminator franchise ruled the summer box office, while Kevin Costner gave his droll rendering of the Robin Hood myth. There was a retelling of the Peter Pan story, a Disney monstrosity that broke all kinds of records, a...

The post Night On Earth: The Films Of Jim Jarmusch appeared first on Erick Mertz |

“Life is either a daring adventure or nothing at all.”
― Helen Keller, The Open Door
tags: carpe-diem, challenges, enjoy-life, life, risk-taking
2562 likes