Discover new books on Goodreads
See if your friends have read any of Robert A. Dahl's books 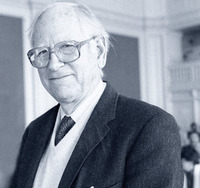 Born
in Inwood, Iowa, The United States
December 17, 1915
Died
February 05, 2014
Genre
Politics
edit data
Robert Alan Dahl was the Sterling Professor emeritus of political science at Yale University, where he earned his Ph.D. in political science in 1940. He was past president of the American Political Science Association and an honorary member of Manuscript Society. He received an honorary Doctor of Laws (LL.D.) degree from Harvard University in 1998.

Quotes by Robert A. Dahl

“democratic theory is concerned with processes by which ordinary citizens exert a relatively high degree of control over leaders;”
― Robert A. Dahl, A Preface to Democratic Theory, Expanded Edition
7 likes
Like

“In short, just as happens in American presidential elections, majoritarianism often fails to produce a government that reflects the choices of a majority of voters. Second, the distortion between seats and votes in majoritarian systems sometimes creates a majority of seats for a party that has failed to win even a plurality of votes and thus has actually come in second. In these cases, the minority party among voters becomes the majority party in the legislature. Third, even in majoritarian systems, “in practice, purely two-party politics is a rare phenomenon and often not robust when it appears.” That is, a third party—like the Liberal Democrats in Britain—may prevent either of the two major parties from gaining a majority of votes, even though one of them may gain a majority of seats.”
― Robert A. Dahl, How Democratic Is the American Constitution?
1 likes
Like

“It is difficult, indeed impossible, to fit the presidency into the simple categories of consensual or majoritarian. One obstacle to straightforward classification is the president’s combination of roles. Most notably, whereas in the other older democracies the roles of prime minister and ceremonial head of state are separated, in our system they are blended, not only constitutionally but also in popular expectations. We expect our president to serve both as chief executive and as a sort of ceremonial, dignified, American-style elected monarch and moral exemplar.”
― Robert A. Dahl, How Democratic Is the American Constitution?
1 likes
Like

See all Robert A. Dahl's quotes »