,
Discover new books on Goodreads
See if your friends have read any of Kevin Hearne's books 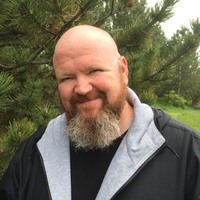 Born
The United States
Website
http://www.kevinhearne.com
Twitter
kevinhearne
Genre
Science Fiction & Fantasy, Mystery
Member Since
January 2010
edit data
Kevin is the NYT bestselling author of the Iron Druid Chronicles, as well as The Seven Kennings, an epic fantasy trilogy, and the Tales of Pell, a humorous fantasy series co-authored with Delilah S. Dawson. INK & SIGIL, a new urban fantasy series set in the Iron Druid universe, will be out in 2020.

Today I became a Canadian citizen. Still an American citizen, of course. But I guess you could say I’m able to Dual Wield now. My family’s incredibly happy about this, as am I.

From time to time people ask why I moved, so I thought I’d write this post as an answer so I can just deploy a quick link whenever it comes up. The list of reasons is in no particular order. Here we go:

More of Kevin's books…
Quotes by Kevin Hearne  (?)
Quotes are added by the Goodreads community and are not verified by Goodreads. (Learn more)
“Monty Python is like catnip for nerds. Once you get them started quoting it, they are constitutionally incapable of feeling depressed.”
― Kevin Hearne, Hounded
318 likes
Like

“Now go and stake some vamps. Especially the sparkly emo ones.”
― Kevin Hearne, Hammered
264 likes
Like

Author of the Month - February/March 2013:
Top two choices will pick for February & March. So vote for your favorite author of romance or Irish themes.

“To be yourself in a world that is constantly trying to make you something else is the greatest accomplishment.”
― Ralph Waldo Emerson
tags: accomplishment, attributed-no-source, be-yourself, conformity, individuality
67701 likes
Like

“The man who does not read has no advantage over the man who cannot read.”
― Mark Twain
tags: aliteracy, attributed-no-source, literacy
40210 likes
Like

“The person, be it gentleman or lady, who has not pleasure in a good novel, must be intolerably stupid.”
― Jane Austen, Northanger Abbey
tags: aliteracy, books, classic, humor
50133 likes
Like

“I love deadlines. I love the whooshing noise they make as they go by.”
― Douglas Adams, The Salmon of Doubt
tags: deadlines, humor, humour, work, writing
31797 likes
Like

Atticus O’Sullivan is the last of the Iron Druids. As an Iron Druid he is more or less a wizard, charged with the protection of the Earth. In Hounded, Atticus and his hilarious dog Oberon (who chats with him through a telepathic link only they share) ally themselves with and oppose both gods and witches in a very action packed saga where Atticus has a knack for getting into trouble even as he is escaping it.
My favorite part of these books is the imaginative characters and the witty remarks Oberon makes.
My least favorite is that it can be so action packed . That should be a good thing but my mind starts to wander after so many battles. If I catch my mind doing that and redirect it back however, I find that I was missing out on some pretty awesome stuff.
The narrator and voice of Atticus in the audio book, Luke Daniels, is a perfect fit.
If you like fantasy battles in a Lord of The Rings style but with a humorous twist, you will adore these books. I hope someday they make a movie out of one of these books, I think it would be a hit!
Since the newest Star Wars just came out, I feel I should mention that author Kevin Hearne has also written a Star Wars book called Heir to the Jedi. I haven't read that one, but hey if thats your thing maybe you should check it out. I have however, read all the Iron Druid chronicles as far as they have been published first on kindle, have the newest on pre-order, and am re- reading them now on audible. So yeah, I'm a fan.

Hey Kevin,
So sorry to see the last Holy Taco Church newsletter. I had a great time reading them and discovering new authors. Looking forward to your next venture with good ol' Oberon, and the audio release of the next Iron Druid -- the pre-order is all I want for Christmas!!

Hello from Spain XD, thaks for the friendship, for writing the Iron Druid Chronicles and started me in Urban Fantasy!!
Krmn

Hello Kevin,
I just wanted to tell your books are the best and perfect books within the Urban Fantasy world; I think I shall never find an Urban Fantasy book with this perfection.
Your ruined them all but for a great cause and now I need your very own recommendations for something as half good as your books...

Thanks for writing The Iron Druid Chronicles...

I have red all your books bar the latest one in very quick time. Love them !
I read somewhere (and i could be mistaken) that you're not a fulltime author, that you work as a teacher or the like. Please stop & write more !!

Thank you for the friending me. I'm almost done with Hounded and really enjoying it. I'm looking forward on finishing it and starting the next.

Thanks for friending me! I have been listening to the Iron Druid Chronicles on audiobook- and the mix between your sense of humor and Luke Daniels' narration is keeping me in stitches! It's been a long time since an author has made me laugh so much- so thank you! Keep up the good work!

Thanks for accepting my friend request! =)
Have a great day & Happy Reading!
Cheers, Mary

I've been reading an awful lot of urban fantasy this last year, and I wanted you to know your series is my absolute favorite. The sense of humor, literary & pop culture references, Oberon, the different pantheons all wrapped up in a tidy and exciting plot with engaging characters... oh, I can't wait for the next ones! Thank you!

Thanks for accepting. I'm finishing off "Hammered" as we speak. The relationship between Atticus and Oberon is possibly my favourite aspect of your books.

I hope there will be more to come.

Oh, and I'll cry like a baby if anything ever happens to Oberon.

Hi Kevin. Thanks for accepting my friendvite. I am looking forward to reading your books. I love urban fantasy!

Thanks for accepting my friend request.

Thank you for accepting my friendship request. I have only now learned about your books which will be released next year. They look really interesting and I seriously cannot wait to read..."

Thanks, Shy! I hope you enjoy them! Always good to meet a fellow bibliophile!

Thank you for accepting my friendship request. I have only now learned about your books which will be released next year. They look really interesting and I seriously cannot wait to read it =)