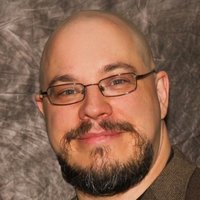 "I am always doing that which I cannot do, in order that I may learn how to do it."

Necrotic Tissue (Horror)
1 chapters   —   updated Dec 03, 2008 06:45PM
Description: A drabble is a story told in 100 words including the title. "Necrotic Tissue" was first published in the premier issue of Necrotic Tissue Magazine in December of 2007.

“That is not dead which can eternal lie,
And with strange aeons even death may die.”
― Howard Phillips Lovecraft, The Nameless City
tags: death
838 likes

“Draw a crazy picture,
Write a nutty poem,
Sing a mumble-gumble song,
Whistle through your comb.
Do a loony-goony dance
'Cross the kitchen floor,
Put something silly in the world
That ain't been there before.”
― Shel Silverstein
1387 likes

“Wise men have regarded the earth as a tragedy, a farce, even an illusionist's trick; but all, if they are truly wise, and not merely intellectual rapists, recognize that it is certainly some kind of stage in which we all play roles, most of us being very poorly coached and totally unrehearsed before the curtain rises. Is it too much if I ask, tentatively, that we agree to look upon it as a circus, a touring carnival wandering about the sun for a record season of four billion years and producing new monsters and miracles, hoaxes and bloody mishaps, wonders and blunders, but never quite entertaining the customers well enough to prevent them from leaving, one by one, and returning to their homes for a long and bored winter's sleep under the dust?”
― Robert Anton Wilson
46 likes

“All good books are alike in that they are truer than if they had really happened and after you are finished reading one you will feel that all that happened to you and afterwards it all belongs to you: the good and the bad, the ecstasy, the remorse and sorrow, the people and the places and how the weather was. If you can get so that you can give that to people, then you are a writer.”
― Ernest Hemingway
tags: authors, good-books, truth, writers
2677 likes

Charles Stross
author of
The Atroc...

Thanks, Bill. Glad you liked the It Came Below the Belt excerpt.