Discover new books on Goodreads
See if your friends have read any of Geoffrey C. Ward's books 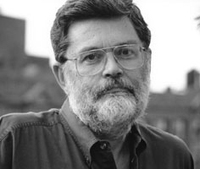 Born
in The United States
November 30, 1940
Genre
History
edit data
Geoffrey Champion Ward is an author and screenwriter of various documentary presentations of American history. He graduated from Oberlin College in 1962.

He was an editor of American Heritage magazine early in his career. He wrote the television mini-series The Civil War with its director Ken Burns and has collaborated with Burns on every documentary he has made since, including Jazz and Baseball. This work won him five Emmy Awards. The most recent Burns/Ward collaboration, The War, premiered on PBS in September 2007. In addition he co-wrote The West, of which Ken Burns was an executive producer, with fellow historian Dayton Duncan.

“In London, Henry Adams cheered the Union triumph, but also saw in it an ominous portent: About a week ago [the British] discovered that their whole wooden navy was useless.… These are great times.… Man has mounted science, and is now run away with.… Before many centuries more … science may have the existence of mankind in its power, and the human race commit suicide by blowing up the world. Even with the menace of the Merrimack now behind him, Lincoln’s blockade of southern ports was easier to declare than enforce. The Confederate coastline, broken by numberless inlets and 189 rivers, stretched from the Potomac to the Rio Grande—3,500 miles. When the war began, one-quarter of the navy’s regular officers had defected to the South, and Secretary of the Navy Welles was left with”
― Geoffrey C. Ward, The Civil War
1 likes
Like

“FOR SIX MONTHS in the winter, spring, and summer of 1919, Paris was the center of the world. The Great War had ended. The victorious Great Powers—Britain, France, Italy, and the United States—were redrawing much of the world’s map, “as if they were dividing cake,” one diplomat noted in his diary. The city’s streets teemed with petitioners from nearly everywhere on earth, eager to enhance their own position in the final settlement: Africans, Armenians, Bessarabians, Irishmen, Koreans, Kurds, Poles, Ukrainians, Palestinians, Zionists, and desert Arabs in flowing white robes all elbowed their way past French war widows dressed in black. The British diplomat Harold Nicolson compared the colorful scene to “a riot in a parrot house.”
― Geoffrey C. Ward, The Vietnam War: An Intimate History
0 likes
Like

“There is no evidence that Wilson ever saw the petition, but it was understandable that colonized peoples looked to him for help. His Fourteen Points, the wartime statement of Allied principles intended to guarantee fairness in the peace negotiations, had pledged that during “the free, open-minded and absolutely impartial adjustment of all colonial claims,” the interests of the colonized should be given “equal weight” with those of the colonizers. That was precisely what the Vietnamese petitioners wanted. As a subject people, they declared, Wilson’s advocacy of self-determination had filled them “with hope…that an era of rights and justice [was opening] to them.” They did not demand independence from France, but they did call for “a permanent delegation of native people elected to attend the French parliament” as well as freedom of speech and association and foreign travel, technical and professional schools in every province, and equal treatment under the law.”
― Geoffrey C. Ward, The Vietnam War: An Intimate History
0 likes
Like

Is this you? Let us know. If not, help out and invite Geoffrey to Goodreads.