Discover new books on Goodreads
See if your friends have read any of Peter A. Lillback's books 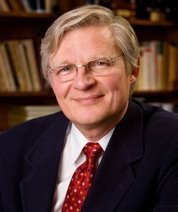 Quotes by Peter A. Lillback

“George Washington clearly shared the foundational Virginian concern to “Christianize the savages” dwelling in the Virginia Colony. On July 10, 1789, in response to an address from the directors of the Society of The United Brethren for Propagating the Gospel Among the Heathen, Washington stated: In proportion as the general Government of the United States shall acquire strength by duration, it is probable they may have it in their power to extend a salutary influence to the Aborigines in the extremities of their Territory. In the meantime, it will be a desirable thing for the protection of the Union to co-operate, as far as circumstances may conveniently admit, with the disinterested [unselfish] endeavours of your Society to civilize and Christianize the Savages of the Wilderness.28 A Deist, by definition, rejected Christianity and accepted the equivalence of all religions’ worship of God. So no Deist could see the plan for the “conversion of the heathen” outlined by Bishop Ettwein and the Brethren as both “laudable” and “earnestly desired.” Yet those are Washington’s words.”
― Peter A. Lillback, George Washington's Sacred Fire
1 likes
Like

“The inescapable conclusion is that Washington was a Christian.”
― Peter A. Lillback, George Washington's Sacred Fire
0 likes
Like

“a view that reflects the profound words of Dr. Gaffin: “Christ is the mediatorial Lord and Savior of redemptive history not only at its end but also from beginning to end.”
― Peter A. Lillback, Seeing Christ in All of Scripture: Hermeneutics at Westminster Theological Seminary
0 likes
Like

See all Peter A. Lillback's quotes »


Is this you? Let us know. If not, help out and invite Peter to Goodreads.