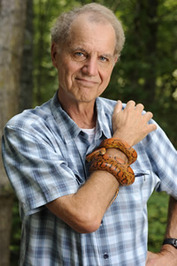 Hal Herzog is Professor of Psychology at Western Carolina University and lives in the Smoky Mountains with his wife Mary Jean and their cat Tilly. ...more

“The inconsistencies that haunt our relationships with animals also result from the quirks of human cognition. We like to think of ourselves as the rational species. But research in cognitive psychology and behavioral economics shows that our thinking and behavior are often completely illogical. In one study, for example, groups of people were independently asked how much they would give to prevent waterfowl from being killed in polluted oil ponds. On average, the subjects said they would pay $80 to save 2,000 birds, $78 to save 20,000 birds, and $88 to save 200,000 birds. Sometimes animals act more logically than people do; a recent study found that when picking a new home, the decisions of ant colonies were more rational than those of human house-hunters.
What is it about human psychology that makes it so difficult for us to think consistently about animals? The paradoxes that plague our interactions with other species are due to the fact that much of our thinking is a mire of instinct, learning, language, culture, intuition, and our reliance on mental shortcuts.”
― Hal Herzog, Some We Love, Some We Hate, Some We Eat: Why It's So Hard to Think Straight About Animals
tags: animals, behavior, charity, cognition, decision-making, ethics, illogical, logic, paradox, psychology, rational-thought, rationalism, thinking
21 likes
Like

“Psycholinguists argue about whether language reflects our perception of reality or helps create them. I am in the latter camp. Take the names we give the animals we eat. The Patagonian toothfish is a prehistoric-looking creature with teeth like needles and bulging yellowish eyes that lives in deep waters off the coast of South America. It did not catch on with sophisticated foodies until an enterprising Los Angeles importer renamed it the considerably more palatable "Chilean sea bass.”
― Hal Herzog, Some We Love, Some We Hate, Some We Eat: Why It's So Hard to Think Straight About Animals
tags: eating-animals, food, foodie, language, linguistics, names
13 likes
Like

“Scientists have reported that elephants grieve their dead, monkeys perceive injustice and cockatoos like to dance to the music of the Backstreet Boys.”
― Hal Herzog, Some We Love, Some We Hate, Some We Eat: Why It's So Hard to Think Straight About Animals
tags: animal-behavior, animal-cognition, animal-consciousness, animal-research, anthrozoology, backstreet-boys, cockatoos, elephants, emotions-in-animals, monkeys
6 likes
Like

Is this you? Let us know. If not, help out and invite Hal to Goodreads.