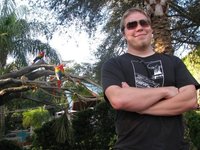 Without going into a ton of detail here, 2019 was an unusually hard one for the Strnads. We’ve been very blessed by friends and family who have come alongside us through our struggles (God has indeed been very good to us, and sometimes hard times are a means to highlight His blessings), but as the year comes to a close I can’t help but utter a hearty “good riddance.” In the midst of it all, Goodre

“Hades cracked his knuckles on each hand, and the noise was like gunpowder caps exploding in the silence. "First dish duty," he mumbled to himself, "now possessed cowboys. This just isn't my night.”
― Josh Strnad, Pantheon
tags: cowboy, mythology, romance, speculative-fiction
1 likes
Like

“He shook his head again. “I’m afraid I don’t feel much of anything these days. Especially not hope. I have no time or energy to waste on false wishes and dreams that won’t come true.”

“Hope isn’t about ignorant wishing.” She surprised even herself with her
defensive backlash. “Hope is about believing—believing there are better
things in store for us if we just wait for them. It’s about understanding we’re not left completely on our own here, regardless of the way things appear.”

Lamont snorted. “That ain’t much for a body to go on.”

“Perhaps not, but I reckon it’s enough. Sometimes it’s gotta be, anyhow.
Without hope, what would drive one onward?”

He was silent for a long moment before he looked up and met her eyes.
His own eyes displayed no emotion when he answered in a weary, grim
tone, “Fear.” He took a drink and fell silent again as she quietly scrutinized him, attempting to discern in his haggard face the thoughts behind what he had said.”
― Josh Strnad, Pantheon