Discover new books on Goodreads
See if your friends have read any of Steven L. Peck's books 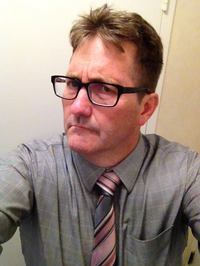 Steven Peck is currently reading
Why Fish Don't Exist: A Story of Loss, Love, and the Hidden Order of Life
by Lulu Miller
bookshelves: currently-reading

“It seemed funny that one day I would go to bed in her arms and the next not feel anything, like a switch had gone off. But no, that wasn’t honest either. This had been building for a long time. Our silences were getting longer. Our arguments more frequent. How do you stay with someone when there are no dreams to build? No purpose to accomplish? No meaning? No meaning —that was the monster that drove us away from one another in the end. Always.”
― Steven L. Peck, A Short Stay in Hell
tags: breaking-up, dreams, existence, existentialism, love, meaning, relationships
51 likes
Like

“The days passed in a dream. I pictured our reunion again and again, played it out in my mind over and over until I’d almost worn a groove in my thoughts, so deep that it seemed the only thing I could think of was our reunion. Anticipation is a gift. Perhaps there is none greater. Anticipation is born of hope. Indeed it is hope’s finest expression. In hope’s loss, however, is the greatest despair.”
― Steven L. Peck, A Short Stay in Hell
tags: anticipation, despair, hope, longing, loss, love, solitude
45 likes
Like

“[Y]ou are here to learn something. Don’t try to figure out what it is. This can be frustrating and unproductive.”
― Steven L. Peck, A Short Stay in Hell
tags: existence, existentialism, frustration, hell, life, wisdom, zen
16 likes
Like

“Amid the green peace, amid the rightness of nature, the violence of a lie stands out. It is so utterly wrong, a violation of the rightness of the logos. A lie is at the root of all mental distress, the discord between what humans know and what they say, or more deeply, between what humans know and what they dare to admit to themselves. A century ago, Borden Parker Bowne listed the need for truth as one of the most elementary human needs.44 Today, that may seem quaint. We have become accustomed to living in a world of make-believe, of artifacts masquerading as physical objects—the paper flowers pretending to be living plants, the plastic furniture pretending to be wood, the robots pretending to be humans—and humans pretending to be robots. Yet through the ages humans have known that there is no condition more basic to authentic humanity than to live in truth.”
― Erazim V. Kohák, The Embers and the Stars
1 likes
Like

Magical Realism — 29 members — last activity Mar 30, 2012 06:53AM
An exploration of magical realist topics, from anything that excites you about the movement to a simple debate on its definitions.

Therese Doucet
author of
The Priso...

Whoo hoo! You got your author page up, so I can finally become your fan - formally speaking! :)