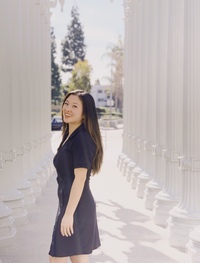 Danielle The Book Huntress *Pluto is a Planet!*

Huang lives in New York City and is completin Bethany Huang published her first book, The Eiffel Tower's Daughter, at 10 years old. The book is ranked No.1 on SBEP Summer Reading List 2011 from BoysHopeGirlsHope.org. The book is also placed at top 10% at Barnes & Noble Teen Fiction - Adventure List.

Huang lives in New York City and is completing a BFA at NYU Tisch. ...more

Hi again!
Hope you're all safe and sound in the snowy weather :). I've been thinking about my decision, and I definitely am going to be blogging again. However, I found that I want to have a clean slate and start from the beginning. I don't want to erase bookablog, but I think I'm going to start from scratch.

More of Bethany's books…
Quotes by Bethany Huang  (?)
Quotes are added by the Goodreads community and are not verified by Goodreads. (Learn more)
“Oh no…!” Swanilde gasped, a dance of emotions going across her face. I could see sadness, anger, fear, and compassion-as well as so many more emotions that I couldn’t grasp. “My father-he’s dead!”
― Bethany Huang, The Eiffel Tower's Daughter: The Truth Behind the Lies
tags: daughter, eiffel, towers
2 likes
Like

“Aria: I went to Hollis. Because I was looking for...you know. Her. She was teaching an art class, so I ran inside, grabbed a paintbrush, and painted a scarlet A across her chest. You know, like that woman in The Scarlet Letter? It was awesome. She didn't know what hit her. And then I said, 'Now everyone will know what you've done'.

Ella: Do you realize that Hester Prynne is supposed to be a sympathetic character?”
― Sara Shepard, Perfect
tags: aria, perfect, pretty-little-liars
160 likes
Like

“It does not do to dwell on dreams and forget to live.”
― J.K. Rowling, Harry Potter and the Sorcerer's Stone
tags: dreams, life
48259 likes
Like

“Towards midnight the rain ceased and the clouds drifted away, so that the sky was scattered once more with the incredible lamps of stars. Then the breeze died too and there was no noise save the drip and tickle of water that ran out of clefts and spilled down, leaf by leaf, to the brown earth of the island. The air was cool, moist, and clear; and presently even the sound of the water was still. The beast lay huddled on the pale beach and the stains spread, inch by inch.

The edge of the lagoon became a streak of phosphorescence which advanced minutely, as the great wave of the tide flowed. The clear water mirrored the clear sky and the angular bright constellations. The line of phosphorescence bulged about the sand grains and little pebbles; it held them each in a dimple of tension, then suddenly accepted them with an inaudible syllable and moved on.

Along the shoreward edge of the shallows the advancing clearness was full of strange, moonbeam-bodied creatures with fiery eyes. Here and there a larger pebble clung to its own air and was covered with a coat of pearls. The tide swelled in over the rain-pitted sand and smoothed everything with a layer of silver. Now it touched the first of the stains that seeped from the broken body and the creatures made a moving patch of light as they gathered at the edge. The water rose further and dressed Simon's coarse hair with brightness. The line of his cheek silvered and the turn of his shoulder became sculptured marble. The strange, attendant creatures, with their fiery eyes and trailing vapours busied themselves round his head. The body lifted a fraction of an inch from the sand and a bubble of air escaped from the mouth with a wet plop. Then it turned gently in the water.

Somewhere over the darkened curve of the world the sun and moon were pulling; and the film of water on the earth planet was held, bulging slightly on one side while the solid core turned. The great wave of the tide moved further along the island and the water lifted. Softly, surrounded by a fringe of inquisitive bright creatures, itself a silver shape beneath the steadfast constellations, Simon's dead body moved out towards the open sea.”
― William Golding, Lord of the Flies
112 likes
Like

“Marrying Therandil? I don’t know. I’ve tried talking to my parents, but they won’t listen, and neither will Therandil.”

“I didn’t ask what you’d said about it,” the frog snapped. “I asked what you’re going to do. Nine times out of ten, talking is a way of avoiding doing things.”
― Patricia C. Wrede, Dealing with Dragons
tags: actions-over-words, frog, funny
212 likes
Like

“Now you know," I said lightly, and shrugged. "No one's ever loved anyone as much as I love you.”
― Stephenie Meyer, Breaking Dawn
1228 likes
Like

Hogwarts Academy — 26 members — last activity Jul 01, 2015 09:25AM
The Wizarding World of Harry Potter comes alive here. All fans of Harry Potter may enter. Others may not.

hey bethany! I know that i'm probably the hundredth one sending you a comment, but i'm just wondering if you are working on a new book soon...?

I'm not the first one to tell you that you are awesome, either. I'm ten and I've only ended 4/7 stories I've written so far:) good job on publishing one!

awww, thanks for accepting me as a friend! it's pretty cool to have a published author as a friend :D and it's amazing that you published your book at only 10.

Hey after along time!

thanks for accepting me!

Hey Bethany,
Thanks so much for becoming my friend!

I look forward to getting to know you better and sharing recommendations with you. :)

Have a great night!