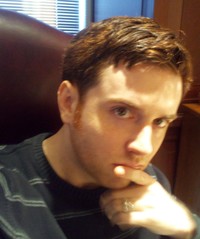 He's right behind you!

Go to my Site

Troy Blackford is currently reading
Hadrosaurs (Life of the Past)
by David A. Eberth
bookshelves: currently-reading

Troy Blackford is currently reading
Medullablastoma and I: A journey through Brain Cancer
by Gari Wellingham
bookshelves: currently-reading

“without purpose your sharp perceptions and subtle noticings are just an excuse to swim around inside your own head like a goldfish whilst the real world rages on about you. You’re all vision and no purpose, in a world that demands we constantly ready ourselves not to bark, but to bite. ”
― Troy Blackford, For Those With Eyes to See
2 likes
Like

“Listen, we have a rule where I come from: always look forward. Never mind what happened. It’s in the past so let it stay there,”
― Troy Blackford, Robbed of Sleep, Vol. 1: Stories to Stay Up For
0 likes
Like

“As my father always used to tell me, 'You see, son, there's always someone in the world worse off than you.' And I always used to think, 'So?”
― Bill Bryson, The Lost Continent: Travels in Small Town America
tags: cynicism, humor
527 likes
Like

“The most important things are the hardest to say. They are the things you get ashamed of, because words diminish them -- words shrink things that seemed limitless when they were in your head to no more than living size when they're brought out. But it's more than that, isn't it? The most important things lie too close to wherever your secret heart is buried, like landmarks to a treasure your enemies would love to steal away. And you may make revelations that cost you dearly only to have people look at you in a funny way, not understanding what you've said at all, or why you thought it was so important that you almost cried while you were saying it. That's the worst, I think. When the secret stays locked within not for want of a teller but for want of an understanding ear.”
― Stephen King
tags: writing
5487 likes
Like

“Thus, from the war of nature, from famine and death, the most exalted object which we are capable of conceiving, namely, the production of the higher animals, directly follows. There is grandeur in this view of life, with its several powers, having been originally breathed into a few forms or into one; and that, whilst this planet has gone cycling on according to the fixed law of gravity, from so simple a beginning endless forms most beautiful and most wonderful have been, and are being, evolved.”
― Charles Darwin, The Origin of Species
tags: biology, evolution, grandeur, inspirational, nature, science, wonder
588 likes
Like

Val Tenterhosen
author of
Robbed of...

Jen Naumann
author of
What I've...

Thanks for accepting the friend request, Troy.

Thank you for including me amongst your impressively many friends.

I look forward to ambling through your reads.

Troy, thanks for accepting my friend request. Have yourself a very Happy New Year :)

Thanks for the add Troy! ;)

Hi troy thanks for friend add :)

Thanks for the friend request, Troy! It's great to meet a fellow writer. Your books look right up my alley. Looking forward to bumping into you here in the GR halls.
~Saul

Hey Troy! Thanks for your friendship :D

Thanks for the invite.

Hi Troy. Thanks for the friendship on Goodreads. I look forward to discussing books with you. :)

Thank you for the friend request.

Thanks for looking me up, Troy.

Thanks Troy for friending,
Please check out my gutsy memoir, ME & HER: a Memoir of Madness.
A teacher’s story of parent harassment, mental breakdown & Recovery
How did Reclaim my life? Read #20 pages for FREE http://lnkd.in/BmuVR7
What do you think?
cheers,
Karen :)
http://www.goodreads.com/author/show/...

Thanks for the friendship request ^_^.

Thanks for your friendship on Goodreads, Troy.

Hi Troy,
Thanks for the friend request :)

Hi Troy, thanks for adding me!

Thanks for the friends request :)

Thank you for your friendship, Troy. Have to say this is one interesting page! LIKE. Checked a couple of your book reviews and they sound interesting.

Best wishes and success in your writing.

Hey Troy, thanks for the friend req.

Thanks for the friend request. Have a great evening.

Troy,
Thank you for the friendship.
Stay naughty,
Savannah

Hi Troy! Thanks for the GR friendship.