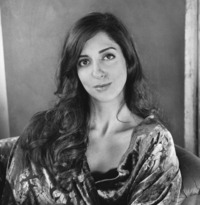 “An audaciously ambitious novel that teeters along a tightrope but never falls off.

Following her well-received debut (Sons and Other Flammable Objects, 2007), this Iranian-American novelist returns with what on the surface is a coming-of-age story about a boy who was raised as a bird, based on a myth from the Persian Book of Kings (which finds its way into the story Read more of this blog post »
2 likes · Like  •  0 comments  •  flag

· 7,354 ratings · 1,042 reviews · 18 distinct works • Similar authors
More books by Porochista Khakpour…
Quotes by Porochista Khakpour  (?)
Quotes are added by the Goodreads community and are not verified by Goodreads. (Learn more)
“And the deal with so many chronic illnesses is that most people won't want to believe you. They will tell you that you look great, that it might be in your head only, that it is likely stress, that everything is okay. None of these are the right things to say to someone whose entire existence is a fairly consistent torture of the body and mind. They say it because they are well-intentioned usually, because they wish you the best, but they also say it because you make them uncomfortable. Your existence is evidence of death. . . .”
― Porochista Khakpour, Sick: A Memoir
tags: chronic-illness, illness, sickness
17 likes
Like

“It is no coincidence then that doctors and patients and the entire Lyme community report—anecdotally, of course, as there is still a frustrating scarcity of good data on anything Lyme-related—that women suffer the most from Lyme. They tend to advance into chronic and late-stage forms of the illness most because often it's checked for last, as doctors often treat them as psychiatric cases first. The nebulous symptoms plus the fracturing of articulacy and cognitive fog can cause any Lyme patient to simply appear mentally ill and mentally ill only. This is why we hear that young women—again, anecdotally—are dying of Lyme the fastest. This is also why we hear that chronic illness is a women's burden. Women simply aren't allowed to be physically sick until they are mentally sick, too, and then it is by some miracle or accident that the two can be separated for proper diagnosis. In the end, every Lyme patient has some psychiatric diagnosis, too, if anything because of the hell it takes getting to a diagnosis.”
― Porochista Khakpour, Sick: A Memoir
tags: chronic-illness, illness, lyme-disease, mental-illness, pyschiatric, sickness, women, women-s-health
8 likes
Like

“Don’t ask for advice too much. Go with you, as gritty as that might be at times.”
― Porochista Khakpour
tags: writing-life
6 likes
Like