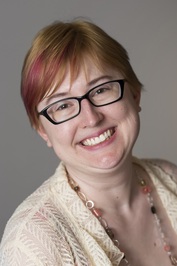 Interview1. What inspired this book?

Cherry Cordial, the heroine. From the moment she appeared in my mind during a car drive, I had to write her story. She arrived, personality large as life, which rarely happens until I’m about 30,000 words into a story. She was a like a gift. And her story, a vampire stripper who is forced to join a colony of undead on Mars – how often does one get to write s Read more of this blog post »
View more on Robyn Bachar's website »
Like  •  0 comments  •  flag

“I turned around to examine the rest of my temporary prison, and saw an enormous golden eye staring at me, less than ten feet away from where I stood.
I did what any sensible witch would do in my circumstance. I screamed like a scared little girl.
The eye blinked. Once, twice, and then shifted as the dragon turned its head toward me, regarding me with both golden eyes. “I could have eaten you, you know.”
I nodded numbly and stammered, “Thank you for not doing that.” I knew dragons existed in Faerie, though I’d never seen one before. Dragons are reclusive as a rule and tend to guard their privacy ferociously, so only the overly brave or overly stupid seek them out on purpose. The creature was huge, taking up a good portion of the room with its bulk. Black scales covered its body, and leathery wings were folded against its back. Smoke puffed out of its nostrils for a moment, and my stomach leapt in panic.
“I only eat virgins though.”
I stared at the dragon in disbelief, feeling the inexplicable urge to defend my past sexual history. My mouth worked as I struggled to find an appropriate response, and I thought I saw a glint of humor in its golden gaze.”
― Robyn Bachar, Blood, Smoke and Mirrors

“I am opposed to Naperville. It's all cute, trendy and expensive, and filled with cookie-cutter Borg houses that assimilate you into upper-middle-class America.”
― Robyn Bachar, Bewitched, Blooded and Bewildered
tags: architecture, chicagoland, house, naperville, suburbs
4 likes
Like

“In short, if you should find yourself in a fight against a vampire, you are really right and proper fucked.”
― Robyn Bachar, Blood, Smoke and Mirrors
tags: screwed, vampire
2 likes
Like

Katie MacAlister
author of
You Slay Me

Keith Melton
author of
The Zero ...