Discover new books on Goodreads
See if your friends have read any of Julie K. Cohen's books 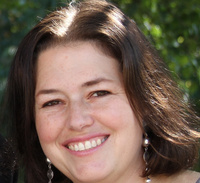 Julie loves developing intricate plots and smart, ‘flawed’ characters who don’t let anyone or anything stand in the way of protecting the ones they love.

Julie loves developing intricate plots and smart, ‘flawed’ characters who don’t let anyone or anything stand in the way of protecting the ones they love.

“form of Banks. “I’m not a dog, Banks. My name’s Sophia.” Craig Banks, head guard and all-around asshole, grinned as his eyes traveled the length of her. Sophia fought the shiver running down her spine as the six-foot-one guard puffed out his broad chest, trying to impress her. The man could be dressed in the finest wool suit instead of the camo pants, blank t-shirt, and combat boots he was wearing, and she’d still want to throw up at the sight of him. The man enjoyed hurting others. Last month when he’d tortured that poor bear shifter for information, Banks had been cracking jokes the entire time. “No, cupcake, you’re certainly not a dog, not with that body and that gorgeous face.” Banks ran his fingers across her bruised cheek. She flinched, but not from the pain of her cheek. “And that’s a compliment. I don’t usually go for brunettes, but you’re the exception.” Lucky me. For once, she was glad for all the people still hanging out talking nearby. Banks wouldn’t touch her here, well, no more than he had already. Her eyes started to drift in the direction of the prison, but she caught herself. Ironic how the shifter felt trapped in there and she felt trapped out here. Right now, she’d gladly switch places with him. “I’m still waiting for that walk in the woods you promised me,” Banks added, letting his hand slide down her neck to the top of her blouse. Resisting the urge to bite his hand, Sophia subtly stepped out of his reach.”
― Julie K. Cohen, Lethal Wolf
0 likes
Like

I love Alpha Male books club — 5935 members — last activity 8 hours, 10 min ago
A new club for the reader that loves a good romance book that stars a sexy, possessive, strong alpha male! No submissive men found in our books!

Reverse Harem Readers - Goodreads — 903 members — last activity Jun 11, 2021 01:55PM
This is a place to talk about Reverse Harem and poly books because love is love!