Discover new books on Goodreads
See if your friends have read any of David L. Craddock's books 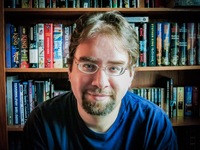 THE DUMPSTER CLUB is available now

The Dumpster Club, my novel for young adults, is now available in paperback and on Kindle: https://www.amazon.com/gp/product/B08...

You can get a taste for the story by reading the first six chapters for free, here: https://theworldforge.com/f/the-dumps...

(Normally I'd recommend going to the book's Amazon page and clicking the title to use the "Look Inside This Book" feature, but Amazon's a Read more of this blog post »
1 like · Like  •  0 comments  •  flag

David said: " To devotees of epic fantasy, the name "George R. R. Martin" is synonymous with Game of Thrones, aka A SONG OF ICE AND FIRE (ASoIaF). But for my money, FEVRE DREAM is Martin's best work.

FEVRE DREAM tells the story of a curmudgeonly old steamboat capta To devotees of epic fantasy, the name "George R. R. Martin" is synonymous with Game of Thrones, aka A SONG OF ICE AND FIRE (ASoIaF). But for my money, FEVRE DREAM is Martin's best work.

FEVRE DREAM tells the story of a curmudgeonly old steamboat captain, Abner Marsh, and Joshua York, a vampire. York comes to Marsh, who has suffered "misfortunes" in his trade, with an offer: York will put up the cash for a lavish steamboat if Marsh agrees to co-captain the boat with York and obey all of York's commands to the letter and immediately, if not sooner. Naturally, Marsh uncovers York's status as a blood-sucking undead. What happens next is not what you'd expect. Then again, that's Martin for you: expect the unexpected.

One of my issues with ASoIAF is that it encapsulates both the best and worst of epic fantasy tropes. For all its interesting characters, punchy dialogue, and fascinating and well-plotted intrigue, the series goes out of its way to trip itself up. Each book is a doorstop; hundreds of trees are chopped down and sacrificed at the altar of Martin's tendency to over-saturate stories with descriptions of food, scenery, and minutia; and--perhaps most egregious to me--much of the story relies on shock value. Readers were giddy with anticipation at the waves of emotional outrage that they knew would flood Internet forums and YouTube channels when characters died in gruesome and sudden fashion.

FEVRE DREAM, written over 10 years before ASoIAF, suffers from none of its weaknesses and encompasses all of its strengths. It's Martin at his best. He wrote the prose from the perspective of Marsh, described as the fattest and ugliest steamboatman on the river. It's a masterclass in perfectly capturing a character's personality, lexicon, habits, and mind.

It's also a gripping and atmospheric horror yarn, and a fascinating period piece: FEVRE unfolds in the American south during the mid-to-late 1800s, when steamboats ruled commerce and vampires were believed to be real by even the most erudite folk. Indeed, the bulk of the novel takes place on the steamboat Marsh and York run together. It becomes home to them, just like it became home to me.

And at just 334 pages, FEVRE DREAM is lean and mean. You won't be able to prop open doors with this bad boy, true, but you also won't lose WEEKS wading through meandering plot lines and dull side characters who should have stayed on the periphery where they belonged.

More than anything, though, FEVRE DREAM is an emotional story about otherness. Given the time period and setting, you would be correct in assuming that slavery and civil rights factor heavily into the story and character development. So do the themes of friendship, of characters deciding whether the differences between them are a bridge too far to travel, of how people from different races and cultures can learn to accept and learn from one another, or use each other in cruel and mutually destructive ways; and of how setting your dreams aside to help your friends achieve their dreams is just as good as realizing your own. Better. ...more "

David is currently reading
The Queens of Animation: The Untold Story of the Women Who Transformed the World of Disney and Made Cinematic History
by Nathalia Holt (Goodreads Author)
bookshelves: currently-reading, audio, nonfiction

Let's start with that foundation. Every Grisham legal thriller blows the legal system wide open in a way that's entertaining for readers. Keeping in mind that these are fictional stories, and that Grisham himself has admitted he endeavors to write page-turners, not ultra-realistic looks at legal processes, every legal thriller he's written exposes phases of the system to make it entertaining and accessible. The trial of Carl Lee Hailey doesn't begin until the last 100 or so pages of KILL; that's because everything leading up to the trial—jury selection, the tension between the Ku Klux Klan and people of color in and around the setting of Ford County, Carl Lee Hailey's state of mind before he killed the men who raped his daughter, protagonist Jake Brigance's financial and morality struggles—informs that trial.

I've labeled Grisham a plot-driven writer in the past. I stand by that. While I prefer-character driven stories, I don't mind plot-heavy ones if they're utterly absorbing. That said, Grisham does a solid job building the characters of Jake Brigance and Carl Lee Hailey, especially Jake, as the story progresses. Grisham's insight into Jake's views on politics, ethics, and race, and how those change as events unfold, paint him as a very different person before the murder trial—more naïve, primarily.

Now let's discuss with what TIME, as Grisham's first published novel—and a commercial failure until the movie adaptation of THE FIRM, his second novel—does better than any others. Besides the character development of fan-favorite Jake Brigance, TIME creates and nurtures a sense of dread that justice will not prevail. Many of his future books show an underdog lawyer as anything but. He, she, or they smack the prosecutor, Grisham's usual antagonist, up and down courtrooms. They suffer a few setbacks, but there's rarely a question of whether things will turn out sweet, or at least bittersweet, for them in the end. There's nothing wrong with that; Grisham's pacing and the intricacies of what he chooses to explore are a fun ride regardless.

KILL is different. Jake and Carl Lee suffer setback after setback before and during the trial. That creates a sinking feeling not found in later novels I've read. That's not always necessary, but with so much on the line personally for Carl Lee and professionally for Jake, tension adds so much to their story.

Many Grisham fans consider A TIME TO KILL Grisham's best novel. I tend to agree. Most authors don't want to hear that. They (we!) always hope we get better at our craft over time rather than being known for a story we published 10+ years ago. But "better" doesn't mean the novels that followed KILL lack anything of substance. They're different. Entertaining and thought-provoking, but different.

--
(2015)
This was my first John Grisham book. A few days ago--maybe 4, maybe 5; it's all a blur--I opened the book and read the foreword first. I always like hearing from authors, and Grisham's easy style of writing hooked me right away. Before starting the book proper, I looked him up online. I knew about Grisham. His novels could be found all over my dad and stepmom's house growing up: on the kitchen table, in the living room, on nightstands. I was not aware of his nickname: "America's Favorite Storyteller." That's a lot to live up to, especially for a reader about to read his first novel--both Grisham's first, and mine.

Believe the hype. A TIME TO KILL is one of the most incredible books I've ever read. Grisham keeps his prose simple. This works in the reader's favor in two ways: the story flows, and all the legal-ese is made palatable. The protagonist, Jake, undergoes an incredible transformation over the course of the story. I went from not liking, to not feeling to sure about him, to sympathizing, to a proud admirer.

And the ending? Easily the most emotional, powerful ending to a story I have ever experienced, in any form.

Simply incredible. Mr. Grisham, I am aware you're not hurting for fans. But for what it's worth, you've got another. ...more "

More of David's books…
Quotes by David L. Craddock  (?)
Quotes are added by the Goodreads community and are not verified by Goodreads. (Learn more)
“items. While Monster Hunter included a single-player mode, its appeal was its online play. The five-man crew who had worked with Capcom thought some the game's networking code looked awfully familiar. "Same network infrastructure, same style of gameplay [as the PS2 Diablo title]," Joe Morrissey said. [Return to Chapter]”
― David L. Craddock, Stay Awhile and Listen: Book II - Heaven, Hell, and Secret Cow Levels
0 likes
Like

“moved to the aura-based system. That's part of development: You throw stuff out there, and it works or it doesn't." Ultimately, however, auras passed the Blizzard North test: If a proposal's merit held up after testing, it made the cut. Auras became a defining characteristic of the Paladin. His assortment of combat skills and defensive auras enabled solo players to survive and thrive on their own, while Paladin players were sought after on Battle.net for the benefits their auras granted to parties. To fully upgrade each of any hero's thirty skills would require 600 skill points. The maximum character-level is 99, meaning players will never receive enough points to master—fully upgrade—all thirty skills. That limitation forces them to make difficult choices: maximize proficiency in a few skills, focus on a half dozen, or potentially spread themselves thin to become competent in all abilities but a master of none. Because each hero's skills are exclusive, all players wind up specializing simply by choosing a class. From there they only specialize further, investing heavily in some skills, spending a single point in others to satisfy requirements for later abilities, and ignoring most of the rest. Those limitations are not meant to restrain players, but to encourage them to think carefully about upgrades. The thought they put into skill points creates a bond between players and their avatars, and the satisfaction that comes from seeing a character evolve—as well as choosing each and every piece of a character's equipment load—feeds into Dave Brevik's peacock mentality: No two players were likely to spec out the same hero. In fact, a single player could roll several Amazons or Paladins and develop each differently. In a way, assigning exclusive skills to Diablo II's heroes was more limiting than Diablo's spell books, which could be read and cast by any of the game's three heroes as long as players dumped enough experience points into their Magic stat. Blizzard North's team saw that limitation as a good thing. It fostered agency, asking players to play an active role in evolving their characters.”
― David L. Craddock, Stay Awhile and Listen: Book II - Heaven, Hell, and Secret Cow Levels
0 likes
Like

Shacknews — 66 members — last activity May 04, 2016 03:09AM
Group for the Shacknews community to talk about books, share recommendations, and so on.