,
Discover new books on Goodreads
See if your friends have read any of Josie Litton's books 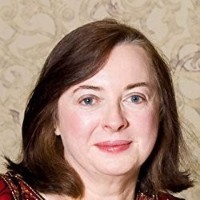 Married and living in Connecticut, she is the parent of two grown children. Becoming an empty nester has left her plenty of time to write, think about writing, plan what to write next, and read. When she isn’t doing that, she’s cooking, gardening, and traveling.

Get an inside look at my new dark romance

I'm a very visual writer, which means that I do storyboards for all my books. Readers have asked to see them but I've been reluctant because they contain spoilers. But the requests keep coming so I decided to edit the storyboard for my next dark romance, the FALLING/RISING duo so that it would give a taste of the characters and the emotional flow of the story while at least hinting at the conflict

More of Josie's books…
Quotes by Josie Litton  (?)
Quotes are added by the Goodreads community and are not verified by Goodreads. (Learn more)
“Utterly still,all but invisible against the wall of the stable, the Dragon kept watch over his Saxon bride.”
― Josie Litton, Come Back to Me
7 likes
Like

“She woke from dreamless rest to find her lap filled with wildflowers-blue and gold violets, white starworts with bright yellow centers, wild geraniums, purple heather, pale lavender bellflowers, creamy butterworts...a treasure trove of nature's jewels.
"Where did these come from?" she asked her warrior husband.
He leaned back on his elbows and studied the sea. "Some trolls came by and left them."
"Trolls picking flowers?"
"More believable, surely, than me doing it?"
She laughed and surprised him by competently weaving the summer's late blossoms into a garland for her hair.
"How is it you know how to do that," he asked, "when you are so thoroughly undomestic?"
She threw a purple aster at him and laughed again. "I thought I was managing to conceal that."
"Oh,certainly.”
― Josie Litton, Come Back to Me
7 likes
Like

“Lord,I love you truly with all my heart. Every moment with you is precious to me but I would give up even that if it meant peace between our peoples. Nothing else can be allowed to matter so much as that."
Dragon did not reply. He was staring at her very oddly. Of the others, she had no awareness at all. Only he existed for her just then.She felt as though there was no ground beneath her but this time instead of falling as she had off the cliff, she soared frantically, desperately,not knowing if at any moment gravity might reclaim her but soaring all the same.
"What did you say?" he demanded.
"Nothing else can be allowed to matter so much as the peace between our peoples! I understand full well how angry you are. The insult done you was profound,but I beg you,think of what you do.Do you go against my father,he wins!"
Slowly,Dragon shook his head as though trying to clear it. His gaze locked on Rycca's like a man holding fast to the rudder in a mighty storm. A dull flush crept over his high-boned cheeks. "Insult? You think I want to kill your father because he insulted me? For pity's sake, woman, I damn near lost you! Don't you have any idea what that means to me?"
Her eyes widened, never leaving him as he stalked across the stone floor of the Saxon's king's great hall and took firm hold of her by her shoulders. He dragged her up against him even as he near yelled, "Dammit to hell, woman, I love you! What care I for insults? Nothing matters to me save keeping you safe and-"
"Love?" Rycca repeated in a daze.
"Loki take you, lady, you are not the easiet woman in the world to get along with, you know! You are strong, spirited, stubborn, not a meek bone in your body! Your body...Never mind that, the point is you have stolen into my heart and I lack any will to get you out, so do not dare you think of dying! I absolutely forbid it! Did you say you love me?"
Oh,my,Rycca thought, she truly did have wings after all.Strong, sturdy wings that would carry her as high as she wanted to climb. And that was very high indeed.
A smile crept over her clear to her toes.She cupped her husband's face between her hands and took his mouth with hers.Well and thoroughly did she kiss him right there in front of everyone. That took some time, and when she was done she was rather breathless. Yet she managed to say, "I love you, lord.More than life,more even than freedom.You are dearest to me above all."
And for just a moment, there in the hall of the king,Rycca of Landsende saw the sheen of tears in her Viking's eyes.”
― Josie Litton, Come Back to Me
6 likes
Like

What is your favorite pseudonym by Maura Seger?