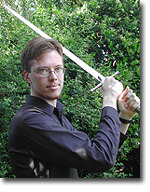 Erik Scott de Bie isn't a Goodreads Author (yet), but they do have a blog, so here are some recent posts imported from their feed.

How Much Combat is in D&D?

Every so often (and by that I mean, every few days, it seems) someone starts up THE DISCOURSE about Dungeons & Dragons as a combat-focused game.

Most recently, this flared up in response to an announcement by the studio Cubicle 7 that they would be releasing a variant of their Doctor Who RPG (which they’ve been designing as a separate system for years) that uses 5e D&D mechanics. Apparently, this i

The World of Ruin (2 books)
by
Erik Scott de Bie

3.49 avg rating — 340 ratings
Quotes by Erik Scott de Bie  (?)
Quotes are added by the Goodreads community and are not verified by Goodreads. (Learn more)
“Interesting how fashion is cyclical,” Jaccob said when she came out of the store with two black plastic bags. “Goth was the look when I was young, too.”

“It’s not a look,” Chuck said. “I’m just wearing my feelings on the outside.”

He rolled up his sleeve to check his HUD, but the call hadn’t come through there.

Huh. He had to pick up his phone and check the read-out, which listed a phone number: an old school page. “That’s funny…”

“That thing where you have to check every single doohickey you carry around.”

“I am not.” Jaccob took his hand out of his coat pocket, where he’d been reaching to check his police scanner or music player (he hadn’t decided which to use first).”
― Erik Scott de Bie, Cobalt City Double Feature
tags: family, humor, parenting, stardust, superhero, technology
1 likes
Like

“It is the curse of quick words--when one shouldn't respond, they come, and when one needs to speak, they are mysteriously absent.”
― Erik Scott de Bie
0 likes
Like

Is this you? Let us know. If not, help out and invite Erik to Goodreads.