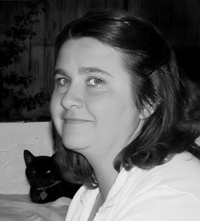 Website
http://www.annienicholas.com
Twitter
annienicholas
Genre
Romance, Paranormal, Space Opera
Member Since
May 2009
edit data
Annie Nicholas hibernates in the rural, green mountains of Vermont where she dreams of different worlds, heroes, and heroines. When spring arrives the stories pour from her, in hopes to share them with the masses one day.

Mother, daughter, wife are some of the hats she happily wears while trudging after her cubs through the hills and dales. The four seasons an inspiration and muse.


Let me introduce Tom Sitter!
If you haven't realized yet, I love stand-up comedians. Tom won open mic night with his Love Hurts story. I came across him on Facebook over the summer and it still sticks with me.

I cried, I laughed so hard after the next one.  Then I watched it four more time.


I live in an area with lots of bats. Ever Fall, one gets inside the freaking house. I'm no better than this guy Read more of this blog post »
View more on Annie Nicholas's website »
Like  •  0 comments  •  flag

Not This (5 books)
by
Annie Nicholas (Goodreads Author)

“Diplomacy was not one of Susan's character flaws.”
― Annie Nicholas, Scent of Salvation
2 likes
Like

“In reality, thousands of years of instinct kicked in. Your forebrain shuts down and a second later you’re running down a dark alley like a gazelle in three-inch”
― Annie Nicholas, Bait
2 likes
Like

Ask Annie Nicholas — 69 members — last activity Jun 15, 2013 01:43PM
Bestselling author Annie Nicholas will be available on June 15th to discuss any question you may have about her books and series.

Free Books, .99, Giveaways & Reviews - Check Them Out! — 8963 members — last activity 5 hours, 8 min ago
This group is for authors, publishers and bloggers to post giveaways and freebies for readers.

I really like the royal sires MaryJanice Davidson, since you like the Fred sire you should check this one.

Annie, thank you for the friendship here on goodreads...


Today at www.CyberLaunchParty.blogspot.com , we're celebrating the release of THE BETA book three in Annie Nicholas' The Vanguards Series.

THE BETA by Annie Nicholas

Three days of hell, in charge, and running out of antacids.

As the pack's Beta, Robert needs to watch over the Vasi werewolf pack for a few days. He hates the responsibility, but his job is to dissolve any problems while his alpha honeymoons. Nevertheless, trouble comes to town and her name is Esther. She's beguiling, beautiful and picks his pocket. Although Robert doesn't trust her, he still wants to possess her.

Esther arrived in Chicago with the intention of slaying a vampire named Daedalus. While trailing her quarry, she encounters Robert who unhinges her world. He doesn't know her trade, and she doesn't know his connection to the vampire. Disturbed by her attraction to this unusual werewolf, she can't decide which prey to hunt. The one who's stolen her heart or the one who'll fill her bank account.

WIN - Leave Annie a question today at her Cyber Launch Party and your name goes in the hat for one of TWO PRIZES - the first two ebooks in her Vanguards Series - THE OMEGAS or THE ALPHA .

Congrats on the new release Annie!!!

Caught between two vampires, Connie is torn between Rurik, the one she loves and Tane, the one she'd love to stake.

Hunger burns in Connie Bences' soul--she craves the blood of her vampire lover, Rurik, but it's not satisfying her needs anymore. It's driving her insane. Desperate to find help, Rurik brings her to Rio De Janeiro, where Tane rules the vampire nation.

The back-stabbing vampire almost killed her and Rurik when they'd first met, then used them to obtain his crown. She would rather stake him, but the small drop of Nosferatu blood he'd forced her to drink in Budapest is blooming into a bond, one which ties her life to his. One he won't hesitate to manipulate.

He admits to binding her so Rurik would have to remain at his side, but their timing couldn't be any worse. The betrayer finds himself betrayed. Tane's rule is in upheaval and he's forced to place his trust in two people who owe him no allegiance - her and Rurik. In the middle of a power struggle, Connie fights to keep her lover, but didn't plan on Tane slipping into her heart.

Today over at www.CyberLaunchParty.blogspot.com we're celebrating the release of THE ALPHA, book two in Annie Nicholas' The Vanguards Series.


Someone is about to get some Spice in his life.

Spice has nothing but the clothes on her back when she returns to Chicago. She's looking for a better life, and that means reuniting with her estranged twin sister, Sugar. She isn't thrilled to find out Sugar's boyfriend is a vampire. But then she meets Eric, once the bottle-cap-glasses wearing nerd next door - now grown into the kind of man she'd love to snuggle with on this cold winter night...and he's offered her his room in Sugar's house.

Eric can't believe Spice has returned. He'd given up hope of ever seeing her again, let alone having her stare at him as if he's sex on a stick. But now that all of his fantasies for them are coming true, reality rears her ugly head and Eric must tell Spice his intimate secret; he's actually an Alpha werewolf looking for his mate and he thinks he's found her.

WIN - Leave Annie a question or comment today at www.CyberLaunchParty.blogspot.com and your name goes in the hat for a free download of book one in her The Vanguards Series, THE OMEGAS. Please leave your email address so we can contact you if you are today's winner!

Sent on a mission to lure Budapest's vampire Overlord into a trap, Connie Bence is instead caught red-handed by the dark Casanova. Her employer has concrete proof of the dubious leader’s misdeeds but she is surprised when this ruthless killer, Rurik, offers her protection and rescues her from his own kind. It plants seeds of doubt in her mind and she begins to question his guilt. Now she is thrown into his world where blackmail determines her every move and where she must betray those she cares about or let them die. The stakes are high. She either puts her trust in Rurik or leads him to his execution.

Hey Annie!!! Congrats on the new release and hope you're having fun at your Cyber Launch Party today!

Assigned as an interpreter to the Cyngi, Liaison Sadie Beckit is left in the dark. Knowledge is power when dealing with multiple races of aliens but this mysterious species has chosen to withhold most of their culture and language information.

Crossing multiple star systems to the remote Cyngi world on an old space freighter, she has come to accompany Ambassador Nual back to Central Station. On their return journey the crew and passengers end up fighting for their lives.

Sadie is forced to confront her past. Difficult choices must be made and the survival of a whole race depends on her decisions. Can she abandon her heart and sacrifice the Red Dawn?

Today we're throwing Annie Nicholas a Cyber Launch Party to celebrate the release of THE OMEGAS - her nerdy werewolf story from Lyrical Press.

Only a vampire is man enough to teach werewolves how to fight.

Stop by and you could win a box of Lake Champlain chocolates! www.CyberLaunchParty.blogspot.com

CONGRATS on the new release!

Pretty librarian Sugar wants her life to stay quiet. That's hard enough when friends and neighbors turn into furry wolves every full moon. But when a hot vampire gets involved, life's bound to get complicated.

The Omega have always been the pansies of the paranormal. Now Chicago's top werewolf pack has issued them a life or death challenge. Their only option: hire a vampire warrior to teach them the moves.

Daedalus has been a powerful vampire for ages. Intrigued by the chance to train the geeks of the underworld, he wasn't bargaining on losing his heart to a human. Can he make the Omegas a success, fit into Sugar's quiet life, and avoid being ripped to shreds in the process?

Sent on a mission to lure Budapest's vampire Overlord into a trap, Connie Bence is instead caught red-handed by the dark Casanova. Her employer has concrete proof of the dubious leader’s misdeeds but she is surprised when this ruthless killer, Rurik, offers her protection and rescues her from his own kind. It plants seeds of doubt in her mind and she begins to question his guilt.

Now she is thrown into his world where blackmail determines her every move and where she must betray those she cares about or let them die. The stakes are high. She either puts her trust in Rurik or leads him to his execution. Love or life.

WIN - leave Annie a question or comment today at www.CyberLaunchParty.blogspot.com and your name goes in the hat for a prize!

Good to see ya on GR!