,
Discover new books on Goodreads
See if your friends have read any of Stephen M. Irwin's books 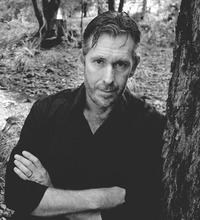 Of Screens and Screams

I have been a bad, bad blogger.  A wrist slap won't do it, and what's the point of jailing me?  So, a stern warning from the mirror, and off we go.

Time has flown since I posted last, and lots of fun and interesting things have happened.  Lots of stuff for the small screen; a little for the big screen, and a lot of silent screams of frustration in my own over-muddled head (the result, of course, of

· 3,323 ratings · 504 reviews · 9 distinct works • Similar authors
More books by Stephen M. Irwin…
Quotes by Stephen M. Irwin  (?)
Quotes are added by the Goodreads community and are not verified by Goodreads. (Learn more)
“Laine slowly rolled out of bed. The queen size was one of the few new things in the house. But now, even the new bed felt tainted. It was an inner-spring monument to lies, a petri dish of mendacity she had shared with her faithless husband, and shared now with creeping dreams that flew from the light but left harsh scratches and diseased black feathers. Laine promised herself that, as soon as, she could, she would rid herself of this house, this bed, her clothes, her jewelry - everything but the flesh she lived in. She would scrub herself clean and flee to start a new life whose first and only commandment would be: Never let thyself be lied to again.”
― Stephen M. Irwin, The Dead Path
tags: adultery, betrayal, emotions, escaping, longing, loss, material-possessions, overwhelmed, past, running-away, unclean
23 likes
Like

“Tears sprang from her eyes and she bit her lip to stop herself from howling at the bright pain.”
― Stephen M. Irwin, The Dead Path
tags: crying, injury, keeping-silent, pain
18 likes
Like

“But a smell shivered him awake.
It was a scent as old as the world. It was a hundred aromas of a thousand places. It was the tang of pine needles. It was the musk of sex. It was the muscular rot of mushrooms. It was the spice of oak. Meaty and redolent of soil and bark and herb. It was bats and husks and burrows and moss. It was solid and alive - so alive! And it was close.
The vapors invaded Nicholas' nostrils and his hair rose to their roots. His eyes were as heavy as manhole covers, but he opened them. Through the dying calm inside him snaked a tremble of fear.
The trees themselves seemed tense, waiting. The moonlight was a hard shell, sharp and ready to ready be struck and to ring like steel.
A shadow moved.
It poured like oil from between the tall trees and flowed across dark sandy dirt, lengthening into the middle of the ring. Trees seem to bend toward it, spellbound. A long, long shadow...”
― Stephen M. Irwin, The Dead Path
tags: ancient, fear, forest, green-man, hair-standing-on-end, magic, odor, old-god, primal, semiconscious, smell, supernatural, visitation
18 likes
Like

The horror genre won the poll for our next read which we will begin discussing on March 15th. Vote for your choice.

Australia — 63 members — last activity Nov 01, 2014 10:56PM
A group for Australian readers and writers, as well as those with an interest in Australian writing and writing about Australia.