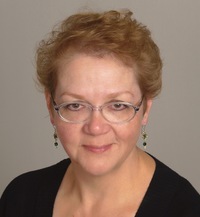 Website
http://www.elainecunningham.com/
Genre
Science Fiction & Fantasy
Member Since
June 2010
URL
https://www.goodreads.com/elainecunningham
edit data
Librarian Note: There is more than one author in the GoodReads database with this name. See this thread for more information.


Elaine Cunningham is an American fantasy author, best known for her contributions to shared-world settings such as the Forgotten Realms, Star Wars, EverQuest, and Pathfinder Tales.
Librarian Note: There is more than one author in the GoodReads database with this name. See this thread for more information.


Elaine Cunningham is an American fantasy author, best known for her contributions to shared-world settings such as the Forgotten Realms, Star Wars, EverQuest, and Pathfinder Tales.
...more

When writing for the Forgotten Realms, how much did the people over there control what you write and how you write it? I heard even R. A. Salvatore complain in an interview he wanted to have a monk as main character in a book but they forced him to make a cleric (The Cleric Quintet series).
Elaine Cunningham Hi, Ciprian! Thanks for asking.

Editorial control varies from project to project, and from one editor to another. With Liriel's story, here's what the …moreHi, Ciprian! Thanks for asking.

I started reading these anthologies when they were in the single digits, but it never occurred to me until this year to submit a story. "Royal Daughters" is set in a fantasy version of 16th century Scotland, during the infancy of Mary, Queen of Scots. England's king was currently pursuing what was later called "the Rough Wooing," a brutal series of raids and battles in Scotland's border country, w Read more of this blog post »
3 likes · Like  •  0 comments  •  flag

“How about it, Skywalker? Will you still fight for me after we've been married for twenty-odd years?"
"What do you mean by 'still'? You do your own fighting. If I forget that, I'm not likely to survive until our twentieth anniversary."
Mara & Luke”
― Elaine Cunningham, Dark Journey

“More things in this world have been accomplished in this world by persistence than by wisdom.”
― Elaine Cunningham, Windwalker
4 likes
Like

“If you use a wolf to hunt a wolf, keep two arrows near to hand.”
― Elaine Cunningham, Windwalker
3 likes
Like

Who is your favorite high-fantasy author?

Hi, Timothy. Bob Salvatore's Drizzt books span a period of nearly 200 years. Drizzt was born in DR 1297 and his latest adventures took place in 1479. The events of Liriel's story, told in the Starlight & Shadows trilogy, take place in 1361. The WotSQ occurred several years after this. Here's a detailed look at the Forgotten Realms chronology:
http://www.o-love.net/realms/fr_time_...

High I was wondering where does starlinght & shadows fit in with r.a. salvatore's dritz's series? Along with war of the spider queen.