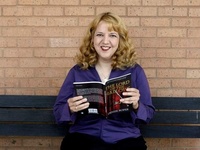 Denise Roper is currently reading
The Ring and the Cross: Christianity and the Lord of the Rings
by Paul E. Kerry
bookshelves: currently-reading

“It is our choices, Harry, that show what we truly are, far more than our abilities.”
― J.K. Rowling, Harry Potter and the Chamber of Secrets
tags: abilities, choices
50529 likes

“I wish it need not have happened in my time," said Frodo.
"So do I," said Gandalf, "and so do all who live to see such times. But that is not for them to decide. All we have to decide is what to do with the time that is given us.”
― J.R.R. Tolkien, The Fellowship of the Ring
tags: adventuring, death, time
20023 likes

“We're all human, aren't we? Every human life is worth the same, and worth saving.”
― J.K. Rowling, Harry Potter and the Deathly Hallows
tags: human, life, value, worth
12404 likes

“There was a clatter as the basilisk fangs cascaded out of Hermione's arms. Running at Ron, she flung them around his neck and kissed him full on the mouth. Ron threw away the fangs and broomstick he was holding and responded with such enthusiasm that he lifted Hermione off her feet.
"Is this the moment?" Harry asked weakly, and when nothing happened except that Ron and Hermione gripped each other still more firmly and swayed on the spot, he raised his voice. "OI! There's a war going on here!"
Ron and Hermione broke apart, their arms still around each other.
"I know, mate," said Ron, who looked as though he had recently been hit on the back of the head with a Bludger, "so it's now or never, isn't it?"
"Never mind that, what about the Horcrux?" Harry shouted. "D'you think you could just --- just hold it in, until we've got the diadem?"
"Yeah --- right --- sorry ---" said Ron, and he and Hermione set about gathering up fangs, both pink in the face.”
― J.K. Rowling, Harry Potter and the Deathly Hallows
tags: love, romance, war
4308 likes

“Dumbledore watched her fly away, and as her silvery glow faded he turned back to Snape, and his eyes were full of tears.
"After all this time?"
"Always," said Snape.”
― J.K. Rowling, Harry Potter and the Deathly Hallows
tags: dumbledore, life, love, snape
19274 likes

Harry Potter Super Freaks — 181 members — last activity Jul 02, 2018 07:55AM
Any one who loves Harry Potter and has read all the books. They must idolize J.K. Rowling. all ages accepted!!
More of Denise’s groups…

Ah, excellent: your author's account has been activated! Welcome to Goodreads :-)