Discover new books on Goodreads
See if your friends have read any of Edward L. Glaeser's books 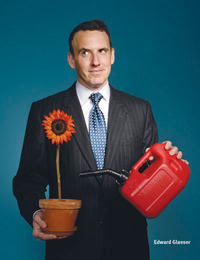 “Cities don't make people poor; they attract poor people. The flow of less advantaged people into cities from Rio to Rotterdam demonstrates urban strength, not weakness.”
― Edward Glaeser, Triumph of the City: How Our Greatest Invention Makes Us Richer, Smarter, Greener, Healthier and Happier
7 likes
Like

“A wealth of research confirms the importance of face-to-face contact. One experiment performed by two researchers at the University of Michigan challenged groups of six students to play a game in which everyone could earn money by cooperating. One set of groups met for ten minutes face-to-face to discuss strategy before playing. Another set of groups had thirty minutes for electronic interaction. The groups that met in person cooperated well and earned more money. The groups that had only connected electronically fell apart, as members put their personal gains ahead of the group’s needs. This finding resonates well with many other experiments, which have shown that face-to-face contact leads to more trust, generosity, and cooperation than any other sort of interaction.
The very first experiment in social psychology was conducted by a University of Indiana psychologist who was also an avid bicyclist. He noted that “racing men” believe that “the value of a pace,” or competitor, shaves twenty to thirty seconds off the time of a mile. To rigorously test the value of human proximity, he got forty children to compete at spinning fishing reels to pull a cable. In all cases, the kids were supposed to go as fast as they could, but most of them, especially the slower ones, were much quicker when they were paired with another child. Modern statistical evidence finds that young professionals today work longer hours if they live in a metropolitan area with plenty of competitors in their own occupational niche.
Supermarket checkouts provide a particularly striking example of the power of proximity. As anyone who has been to a grocery store knows, checkout clerks differ wildly in their speed and competence. In one major chain, clerks with differing abilities are more or less randomly shuffled across shifts, which enabled two economists to look at the impact of productive peers. It turns out that the productivity of average clerks rises substantially when there is a star clerk working on their shift, and those same average clerks get worse when their shift is filled with below-average clerks.
Statistical evidence also suggests that electronic interactions and face-to-face interactions support one another; in the language of economics, they’re complements rather than substitutes. Telephone calls are disproportionately made among people who are geographically close, presumably because face-to-face relationships increase the demand for talking over the phone. And when countries become more urban, they engage in more electronic communications.”
― Edward L. Glaeser, Triumph of the City: How Our Greatest Invention Makes Us Richer, Smarter, Greener, Healthier and Happier
tags: city-life, communication, economics, psychology
3 likes
Like

“It’s hard not to empathize with the mayor’s anger, given the injustices he’d suffered, but righteous anger rarely leads to wise policy.”
― Edward L. Glaeser, Triumph of the City: How Our Greatest Invention Makes Us Richer, Smarter, Greener, Healthier and Happier
tags: anger, coleman-young, detroit, injustice, policy, wisdom
3 likes
Like

Is this you? Let us know. If not, help out and invite Edward to Goodreads.