,
Discover new books on Goodreads
See if your friends have read any of Jaron Lanier's books 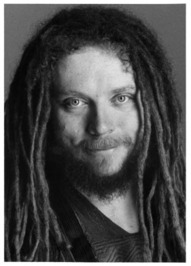 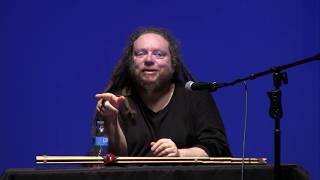 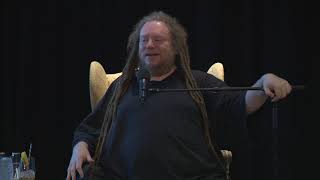 Jaron Lanier scientific interests include biomimetic information architectures, user interfaces, heterogeneous scientific simulations, advanced information systems for medicine, and computational approaches to the fundamentals of physics. He collaborates with a wide range of scientists in fields related to these interests.

Lanier's name is also often associated with Virtual Reality research. He either coined or popularized the term 'Virtual Reality' and in the early 1980s founded VPL Research, the first company to sell VR products. In the late 1980s he led the team that developed the first implementations of multi-person virtual worlds using head moun Jaron Lanier is a computer scientist, composer, visual artist, and author.
In the sciences:

Jaron Lanier scientific interests include biomimetic information architectures, user interfaces, heterogeneous scientific simulations, advanced information systems for medicine, and computational approaches to the fundamentals of physics. He collaborates with a wide range of scientists in fields related to these interests.

Lanier's name is also often associated with Virtual Reality research. He either coined or popularized the term 'Virtual Reality' and in the early 1980s founded VPL Research, the first company to sell VR products. In the late 1980s he led the team that developed the first implementations of multi-person virtual worlds using head mounted displays, for both local and wide area networks, as well as the first "avatars", or representations of users within such systems. While at VPL, he and his colleagues developed the first implementations of virtual reality applications in surgical simulation, vehicle interior prototyping, virtual sets for television production, and assorted other areas. He led the team that developed the first widely used software platform architecture for immersive virtual reality applications. Sun Microsystems acquired VPL's seminal portfolio of patents related to Virtual Reality and networked 3D graphics in 1999.

From 1997 to 2001, Lanier was the Chief Scientist of Advanced Network and Services, which contained the Engineering Office of Internet2, and served as the Lead Scientist of the National Tele-immersion Initiative, a coalition of research universities studying advanced applications for Internet2. The Initiative demonstrated the first prototypes of tele-immersion in 2000 after a three-year development period. From 2001 to 2004 he was Visiting Scientist at Silicon Graphics Inc., where he developed solutions to core problems in telepresence and tele-immersion. He was Scholar at Large for Microsoft from 2006 to 2009, and Partner Architect at Microsoft Research from 2009 forward.

Lanier has received honorary doctorates from the New Jersey Institute of Technology and Franklin and Marshall College, was the recipient of CMU's Watson award in 2001, was a finalist for the first Edge of Computation Award in 2005, and received a Lifetime Career Award from the IEEE in 2009 for contributions to Virtual Reality.

Lanier is a well-known author and speaker. Time Magazine named him one of the 100 most influential people in the world in 2010. His book "You Are Not a Gadget" was released in 2010 and was named one of the 10 best books of the year by Michiko Kakutani in the NY Times. He writes and speaks on numerous topics, including high-technology business, the social impact of technological practices, the philosophy of consciousness and information, Internet politics, and the future of humanism. His lecture client list has included most of the well-known high technology firms as well as many others in the energy, automotive, and financial services industries. His writing has appeared in The New York Times, Discover (where he has been a columnist), The Wall Street Journal, Forbes, Harpers Magazine, The Sciences, Wired Magazine (where he was a founding contributing editor), and Scientific American. He has edited special "future" issues of SPIN and Civilization magazines. He is one of the 100 remarkable people of the Global Business Network. In 2005 Lanier was selected as one of the top one hundred public intellectuals in the world by readers of Prospect and Foreign Policy magazines.

As a musician, Lanier has been active in the world of new "classical" music since the late seventies. He is a pianist and a specialist in unusual musical instruments, especially the wind and string instruments of Asia. He maintains one of the largest and most varied collections of actively played rare instruments in the world.

· 24,885 ratings · 3,450 reviews · 14 distinct works • Similar authors
More books by Jaron Lanier…
Quotes by Jaron Lanier  (?)
Quotes are added by the Goodreads community and are not verified by Goodreads. (Learn more)
“A real friendship ought to introduce each person to unexpected weirdness in the other.”
― Jaron Lanier, You Are Not a Gadget
tags: friendship
113 likes
Like

“Funding a civilization through advertising is like trying to get nutrition by connecting a tube from one’s anus to one’s mouth.”
― Jaron Lanier
40 likes
Like

“But the Turing test cuts both ways. You can't tell if a machine has gotten smarter or if you've just lowered your own standards of intelligence to such a degree that the machine seems smart. If you can have a conversation with a simulated person presented by an AI program, can you tell how far you've let your sense of personhood degrade in order to make the illusion work for you?

People degrade themselves in order to make machines seem smart all the time. Before the crash, bankers believed in supposedly intelligent algorithms that could calculate credit risks before making bad loans. We ask teachers to teach to standardized tests so a student will look good to an algorithm. We have repeatedly demonstrated our species' bottomless ability to lower our standards to make information technology look good. Every instance of intelligence in a machine is ambiguous.

The same ambiguity that motivated dubious academic AI projects in the past has been repackaged as mass culture today. Did that search engine really know what you want, or are you playing along, lowering your standards to make it seem clever? While it's to be expected that the human perspective will be changed by encounters with profound new technologies, the exercise of treating machine intelligence as real requires people to reduce their mooring to reality.”
― Jaron Lanier, You Are Not a Gadget
tags: ai, artificial-intelligence, computers, personhood, technology, turing
34 likes
Like

Is this you? Let us know. If not, help out and invite Jaron to Goodreads.