,
Discover new books on Goodreads
See if your friends have read any of Tara Maya's books 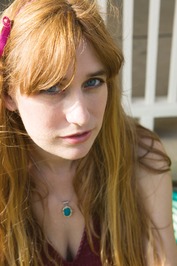 More of Tara's books…
Quotes by Tara Maya  (?)
Quotes are added by the Goodreads community and are not verified by Goodreads. (Learn more)
“The purring kitten on her shoulder and the beauty of the day rinsed away her gloom on the walk home.”
― Tara Maya, Faery Worlds - Six Complete Novels
4 likes
Like

“Don’t you understand? This is your chance to escape who you are, become who you want.”
― Tara Maya, Initiate
2 likes
Like

“Far, far better to die. One by one the rest of the Zavaedis came to cast their stones for either exoneration, exile, or death. Some spoke to the assembly of their reasons why, others simply placed the stone according to their choice. Unfortunately, his mother’s plea moved many people to pity him. When all the rocks had piled up, the orange mat held the most stones. Exile. Kavio swallowed hard to conceal his reaction. You have murdered me all the same. Father pounded the rain stick. “Kavio, you have been found guilty of the most heinous of crimes—hexcraft. Though you remain a member of the secret societies that initiated you and are therefore spared death, nonetheless you are forbidden to enter the Labyrinth, to take with you anything from the Labyrinth, or to study with any dancing society of the Labyrinth. Do you understand and acknowledge your punishment?” “I understand it all too well,” Kavio said through gritted teeth. “But I will never acknowledge it as just.” “So be it,” Father said tonelessly. “Bring the pot of ashes.” Two warriors hefted a ceramic pot from where it had rested in the shadow of the tall platform. They forced Kavio to lean back while still on his knees. They smeared him with a paste and rubbed in the gray-black powder. His bare chest and clean shaven face disappeared under a scum of grey crud. Humiliation itched, but like poison ivy, he knew it would be worse if he scratched it. He forced himself still as stone while the warriors slapped on more mud. “You must wear mud and ash for the rest of your days,” the Maze Zavaedi concluded. His voice broke. “I am ashamed to call you my son.” Kavio struggled to his feet. The warriors escorting him surrounded him with a hedge of spears. Did they fear him, even now? “You never could just trust me, could you, Father?” Kavio asked. Father’s jaw jutted forward. A muscle moved in his neck. Otherwise, he might have been rock. “Escort my son out of the Labyrinth.”
― Tara Maya, Initiate
1 likes
Like

by Amanda Milo
0 votes, 0.0%
8 total votes
comments and details
Sign in to vote »

I am working to get it out as soon as possible! Are you already on my mailing list to be notified as soon as it's out?

When's book five coming out?? I can't wait to read it. I'm going through serious Dindi and others withdrawal.