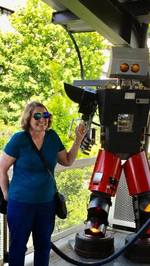 I’m still working on another follow-up story to “The Caves of Titan”. This one is focused on The Cenote People. I had to go back and re-read “TCoT”, to make sure I was back on my Titan again.
The story takes place about 10 years later, so many of the GIS (Galileo Interplanetary School) students have graduated. So far, I have not introduced any new characters, other than King Christopher’s mother; Read more of this blog post »
Like  •  0 comments  •  flag

But I've grown older too,
Wider, and more creaky bones
And "Bones" has travelled on
But, still, "Live long and prosper!"

Back when I was little
Was always Mrs. Spock when
Ever we played "Star Trek"
With my sisters, as a child”
― Debby Feo
tags: poem-mrs-spock
5 likes
Like

“Every story has multiple points of view, don't listen to just one.”
― Debby Feo
4 likes
Like

“I'm not paranoid!" I said
Looking fearfully around”
― Debby Feo
2 likes
Like

“A robot may not injure a human being, or, through inaction, allow a human being to come to harm.”
― Isaac Asimov, I, Robot
tags: three-laws-of-robotics
5 likes
Like

“If consciousness is currency, I've got me a goldmine!”
― Kim Falconer, The Spell of Rosette
tags: australian-authors, fantasy, kim-falconer, quantum-enchantment, the-spell-of-rosette
5 likes
Like

“couldn't find a way into a way out”
― Richard M Russell
tags: seeing-north-light
1 likes
Like

“Hummingbirds certainly communicate important things to humankind about our world_including the power, grace and beauty that can be found in a very small being.”
― Leslie Forsberg
tags: alaska-airlines, horizon-edition-aug-2013
1 likes
Like

“Every time you are tempted to react in the same old way, ask if you want to be a prisoner of the past or a pioneer of the future.”
― Deepak Chopra
3097 likes
Like

Bee Bits — 13 members — last activity Jun 20, 2020 10:53AM
A page to read for littlest kids All poems and drawings are by Debby Feo, and are protected under copyrite. All Rights Reserved

Be sure to check out/subscribe to Alban Lake Publishing's magazines "Frostfire Worlds" and "Bloodbond", so that you don't miss any of my published short stories and poems.
I have 5 vampire books and 3 SciFi books in the Alban Lake store. The Alban Lake store still has copies of "Beyond Centauri" and "Hungur" magazines, and some anthologies I have been in.
At Nomadic Delirium Press, I have 4 short stories in their "The Divided States of America" series.

Scroll down this link for announcement of my second, historical, vampire book: albanlake.com/september-2013

Alban Lake Publishing has just announced the publishing of my second, historical, vampire book called "There Be Vampires" albanlake.com

Just had a haiku accepted for the November "Scifaikuest" (from Alban Lake Publishing).

The most recent issue of "Hungur" (#16) has my haibun called "Robotic Vampire". (White Cat Publishing)

Debby wrote: "The November issue of "Hungur" will have one of my short stories and one of my poems in it. The poem is actually taken from my third (not published) vampire book and was "written" by my main vampi..."

Here is a "preview" poem from my third vampire book "There Be Vampires".

I'm looking for pictures inspired by my children's poems for my new Facebook page: http://www.facebook.com/GrandpasChair...

Debby wrote: "THE BEAR (by Debby Feo, from the book “Grandpa’s Chair”)

“Don’t go in there” said Grandpa
“There is a bear in there!”
We stayed out of that closet
For fear of that old bear

Please check out my new Facebook page: http://www.facebook.com/GrandpasChair... I am looking for pictures inspired by the poems in my three, children's, Smashwords books ("Grandpa's Chair", "Herman's Store", and "Tails From the 'Hood".

The world is full of hate and pain
Must words be hateful too? Debby Feo

"I am but a dot in the larger book of the world." by Debby Feo, from her second, historical, vampire novel called "There Be Vampires" (a future publication).

I was assured by an editor the other day that my 2nd, 3rd, and 4th historical, vampire novels will be published.

Merry Christmas/Happy Holidays to all my ISF Book Club Friends!

THE BEAR (by Debby Feo, from the book “Grandpa’s Chair”)

“Don’t go in there” said Grandpa
“There is a bear in there!”
We stayed out of that closet
For fear of that old bear

The years went by and then
I decided to
See that mean, old bear
See what he would do

I gathered up my courage
And slowly climbed the stairs
Walked quietly down the hall
Turned the corner, and was there

Would that old bear eat me?
He must be really starved
Living in the closet
Instead of in the yard

I opened up the door
Carefully, I was prepared
To run away so quickly
If that bear was really there

So dark, I could see little
So I reached up for the string
No bear was in the closet
It was full of wondrous things

Debby wrote: "I have a haiku in the Nov. 2012 edition of "Scifaikuest". I am also in the current "Hungur" and "Beyond Centauri" (Part 5 of "Encounter in Egypt") magazines: http://sdpbookstore.com/recentrelease..."

I have a haiku in the Nov. 2012 edition of "Scifaikuest". I am also in the current "Hungur" and "Beyond Centauri" magazines: http://sdpbookstore.com/recentrelease...

Haven't been doing much reading lately, been in "writing mode", and also trying to help one of the causes I support, a small business called Built of Barnwood ("Reclaimed by the Somerhalders") started by Bob and Ian Somerhalder and Bob's son Peyton. A % of BOB's sales goes to another cause that I support.

Reading the third book in the "Oldest Living Vampire" series. Didn't like the second book as much as the first, because it is too graphic in parts. Since I do like the parts where Gon, the vampire is in the past, and I had already downloaded the third, am reading now. Still enjoying Gon in the past (not "present").

Just added a mention of this page to my author's page (for "Grandpa's Chair") on Amazon.com

Big News: my first, historical, vampire novel is out! Here's the link for the announcement from Sam's Dot Publishing. I'm mentioned twice in the November "At the Dot": http://samsdotpublishing.com/atthedot...

One of my sci fi series, "Encounter in Egypt" has been appearing in "Beyond Centauri".

Another poem accepted for January "Beyond Centauri". Just sent in bio, back cover info. and dedication for "A Vow of Blood", my historical vampire novel coming out in November. This is the first of four in a series. Others are being considered.

I've added some new quotes from Ian Somerhalder to my favorite quotes.

The November issue of "Hungur" will have one of my short stories and one of my poems in it. The poem is actually taken from my third (not published) vampire book and was "written" by my main vampire Gaius. "Hungur" magazine is now available on Smashwords.

Just had a short story accepted for the January issue of "Cosmic Crime Stories".

I'm keeping my Smashwords edition of "On the Edge" for free, until after the holidays, as holidays can be very hard if one is depressed!

Release Date for my historical, vampire novel "A Vow of Blood" pushed back to November. Cover artist is working on the cover.

On Sept 6, ISF volunteers and friends can vote for ISF to receive a large grant: https://twitter.com/Fatima1579/status... Information on the grant can be found here:
https://fb.chasegiving.com/charity/vi...

In case you are wondering about some of my links (Gaius Mom), Gaius is the main vampire in my four vampire novels. The first one "A Vow of Blood" has been accepted for publication in the Fall.

Issue 12 of "Hungur" magazine (the one with my short story "A Vow of Blood", which is the basis for my vampire novels) is still on the Sam's Dot Best Seller List:
http://sdpbookstore.com/bestsellers.htm
Rachel Olivier's book "The G.O.D. Factor" is also on this list.

Still on for another month (Sept.)

"Herman's Store" the follow-up to "Grandpa's Chair" is now available on Smashwords:
https://www.smashwords.com/extreader/...
Poems (from both books) written over a span of 38 years.

Just found out that my first vampire novel has been accepted for publication (sometime in the Fall)!

I am a published writer: short stories, poems, and books. Was a regular contributor to children's sci fi periodical called "Beyond Centauri", and a contributor to the adult vampire periodical called "Hungur" (both which were from Sam's Dot Publishing).
Listed in past "Poet's Market" under "Beyond Centauri".
Children's sci fi book called "Meet the Mercusons" came out in March.
"A Vow of Blood", the first of my historical, vampire novels, came out in November. Recently, this book came out on Kindle. All four sequels will be published by Alban Lake Publishing, and "Vow Of Blood" has moved to Alban Lake.
Other magazines/anthologies I have been in: "Aoife's Kiss", "Shelter of Daylight", "The Drabbler", "Spaceports and Spidersilk" (online), "Scifaikuest", "Cosmic Crime Stories".
Self-published (with money I inherited from my mother) poetry books: "Grandpa's Chair" - available on Amazon.com, from other bookstores, and now on Smashwords; and "On the Edge" (dealing with depression) - Trafford Publishing, and now on Smashwords.
"Herman's Store", follow-up to GC, is now also on Smashwords, as is "Tails From the 'Hood" about a multi-generational cat family.

The short story ("Vow of Blood") that my four, historical, vampire novels are based on is in the May 2011 issue of "Hungur". http://sdpbookstore.com/bestsellers.htm (Issue 12). The current "Hungur" (Issue 14) has a short story ("Searlas Sinks") about one of my vampires (Gaius' grandson).