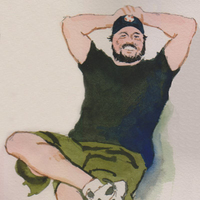 My eldest son can now boast that he knocked his ole man out, giving me a nasty concussion in the process. Now, it’s not as malicious as it sounds. We were playing flag football. We were both on defense, and went after the same ball. The people on the sidelines said the collision was thunderous.
I remember the splash of lights from the hit, but I know I was out for at least a second after, for I don Read more of this blog post »
View more on Maxwell Alexander Drake's website »
1 like · Like  •  0 comments  •  flag

Farmers and Mercenaries - Book one of the Genesis of Oblivion Saga (Science Fiction & Fantasy)
1 chapters   —   updated May 27, 2009 05:10PM
Description: In a sleepy farming stead, a young man, Alant Cor, is found to be one of the few Humans who can manipulate the Essence. And, not simply manipulate it. Alant has more power over this magical force than any Human in known history. Does his younger brother, Arderi Cor, possess the same ability, or something more sinister? Clytus Rillion, the commander of a mercenary troop, embarks on a quest to cure his dying son, Sindian. Though he doubts he will survive the journey, he will pay any price to save his son’s life. The beast, known only as Klain, born a slave and now used to entertain the masses in a bloodthirsty sport known as the Games, finds out his true value to those who own him lies with his death. All are resigned to walk the paths fate has put them upon. Yet, is this of their own accord? Or, is an ancient and powerful race, the Elmorians, manipulating the other inhabitants of Talic’Nauth? Change is falling upon the Plane. Some Elmorians are making preparations to weather the storms ahead - others intend to use the coming chaos to seize power over all the races. Follow these seemingly unrelated lives as their paths are set on a course that none can hope to survive. Readers of the Genesis of Oblivion Saga will immerse themselves in the depth of a unique world culture, the grandeur of its civilizations, and the sheer awe of more than ninety-six thousand years of history!

Las Vegas Authors and their readers — 22 members — last activity Feb 06, 2020 01:15PM
This is a group for Las Vegas authors and readers to get together and meet and greet.

Literate in Las Vegas — 86 members — last activity Jul 25, 2014 02:31AM
From Henderson to Summerline, North Las Vegas to Blue Diamond Road, I invite all Sin City residents to pass on the good word from a good book!

Great to hear from you. I do a lot of events. I am on the road almost 100 days this year going all over the country.

talk to you soon!

It was pretty awesome! If you ever get the chance to go, I highly recommend it.

Drake.. How did the writers convention go? Im excited to hear about your experience. Gloria.