Discover new books on Goodreads
See if your friends have read any of J.M. Martin's books 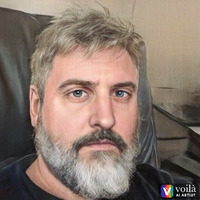 From 2001 to 2005, Joe was the ENnie-award-winning managing editor of Privateer Press, assisting with build In the mid-90s, Joe worked for Caliber Press, where he was mentored by the company's founder and publisher, Gary Reed. The Michigan-based publisher put out comics such as The Crow, Deadworld, The Realm, Kabuki, and more. While at Caliber, Joe had a hand in creating a collectible card game based on Todd McFarlane's Spawn universe; he also designed covers, advertisements, and Spawn "Collectors' Club" circulars for their toy line; he helped manage the company's art archives; he lettered dozens of comics; and he also wrote a 17-issue run of the fantasy comic series, Legendlore, illustrated by the now-renowned French artist Philippe Xavier.

From 2001 to 2005, Joe was the ENnie-award-winning managing editor of Privateer Press, assisting with building the best-selling Iron Kingdoms and Warmachine intellectual properties from scratch. He edited and wrote RPG game supplements, worked with contractors, illustrated maps, and managed a select group of writers.

Joe is the author of the Dead West series (in cahoots with Kenny Soward and Tim Marquitz), and he has penned several short stories in Sails & Sorcery: Tales of Nautical Fantasy, Dark Heroes, Manifesto: UF, Neverland's Library, and At Hell's Gates (vol. 1). He is also the editor of the award-winning Blackguards: Tales of Assassins, Mercenaries, and Rogues (2015).

In mid-2013, he created Ragnarok Publications along with Tim Marquitz. Martin operated as the Creative Director and later Publisher until he retired from Ragnarok in 2017 to indulge in freelance writing and editing and reclaim more of his own time. ...more

A Response to HBO's Paterno

HBO [RECENTLY] AIRED A MOVIE about Joe Paterno. The film stars Al Pacino as Paterno and chronicles Paterno's fall from grace in November 2011 when he eclipsed the NCAA's all time coaching wins record AND was fired from PSU for his culpability in allowing Jerry Sandusky to sexually molest young boys. After viewing the film, I can say it failed to reveal the Paterno I personally experienced as an as Read more of this blog post »
View more on J.M. Martin's website »
Like  •  0 comments  •  flag

More of J.M.'s books…
Quotes by J.M. Martin  (?)
Quotes are added by the Goodreads community and are not verified by Goodreads. (Learn more)
“...knowing the full depth of any human, knowing their hopes and frailties, the hurts of their past, the tremor with which they reach for the future...that knowledge is akin to love.”
― J.M. Martin, Blackguards: Tales of Assassins, Mercenaries, and Rogues
1 likes
Like

“Alas, women have always been drawn to me. Don't roll your eyes, my friend, your wife has been wet all evening just from staring at me. Feel free to ask her, she won't lie.”
― J.M. Martin, Blackguards: Tales of Assassins, Mercenaries, and Rogues
0 likes
Like

“There is evil in all of us, and it is the mark of a man how he defies the evil within.”
― J.M. Martin, Blackguards: Tales of Assassins, Mercenaries, and Rogues
0 likes
Like

“Outside of a dog, a book is man's best friend. Inside of a dog it's too dark to read.”
― Groucho Marx, The Essential Groucho: Writings For By And About Groucho Marx
tags: animals, books, dogs, friends, humor
37566 likes
Like

“We make choices everyday, some of them good, some of them bad. And - if we are strong enough - we live with the consequences.”
― David Gemmell
185 likes
Like

“Civilized men are more discourteous than savages because they know they can be impolite without having their skulls split, as a general thing.”
― Robert E. Howard
tags: humor, life, politics, society
617 likes
Like

Dear J.M,
I would like to thank you so much for being my friend here on GoodReads. I very much look forward to future book discussions with you, as it seems we have a lot in common in regards to liking the fantasy, sci-fi and historical fiction genres and authors too. Thank you once again, it is a real privalidge.
Kind Regards
Lucinda x

LOL, nice to meet you! Central Baptist, though, not St. Joseph. :)

Thanks for the add! I hope you might feel inclined to check out Tisarian's Treasure at some point (or at least add to your To-Read list). To answer your question regarding the RPG stuff, I met a dude named Matt Wilson at a convention in Cincinnati back in the '90s. He was the art director for a little CCG called Magic at the time, but was also interested in comics and I happened to be penning one called Legendlore. So we kept in touch and, eventually, he called and pitched me on a company he was starting called Privateer Press. I was substitute teaching at the time, so it was a great situation for me as far as investing time in writing gaming material for a start-up. Long story short, it was a "who you know" kinda opportunity. I worked for Privateer around five years, taking the reins as managing editor, and helping develop the Iron Kingdoms and guide the ship to a few ENnie Awards. Definitely a fun time.

Hey, thanks for the request, J.M.! You've written some intriguing-looking stuff. How did you get into writing RPG books? That's awesome.

Gurgi, Fflewdurr, Gwydion, and the budding romance between Taran and Eilonwy? The menace of Arawn and his Cauldron-Born? Awesome. I've been such a fantasy geek since an early age and absolutely loved those books as a teen. I re-read the Chronicles when I was around 30 and they still held up.

Got a kick out of seeing the Chronicles of Prydain in your book list :) Loved the hell out of those as a kid!

You're welcome J.M.! And thank you for adding my blog to your blogroll!