Discover new books on Goodreads
See if your friends have read any of John W. Whitehead's books 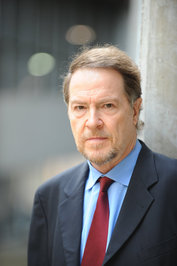 John hasn't connected with his friends on Goodreads, yet.

“[W]hile the use of non-lethal weapons such as tasers and LEDIs may not necessarily reduce the number of civilian casualties, they have been largely accepted as the humane alternative to deadly force because they make the use of force appear far less dramatic and violent than it has in the past.

Contrast, for instance, the image of police officers beating Rodney King with billy clubs as opposed to police officers continually shocking a person with a taser. Both are severe forms of abuse. However, because the act of pushing a button is far less dramatic and visually arresting than swinging a billy club, it can come across as much more humane to the general public. This, of course, draws much less media coverage and, thus, less bad public relations for the police.”
― John W. Whitehead, A Government Of Wolves: The Emerging American Police State
tags: injustice, non-lethal-weapons, perspective, police, police-brutality, taser, violence
10 likes
Like

“[T]here is both an intrinsic and instrumental value to privacy. Intrinsically, privacy is precious to the extent that it is a component of a liberty. Part of citizenship in a free society is the expectation that one's personal affairs and physical person are inviolable so long as one remains within the law. A robust concept of freedom includes the freedom from constant and intrusive government surveillance of one's life. From this perspective, Fourth Amendment violations are objectionable for the simple fact that the government is doing something it has no licence to do–that is, invading the privacy of a law-abiding citizen by monitoring her daily activities and laying hands on her person without any evidence of wrongdoing.

Privacy is also instrumental in nature. This aspect of the right highlights the pernicious effects, rather than the inherent illegitimacy, of intrusive, suspicionless surveillance. For example, encroachments on individual privacy undermine democratic institutions by chilling free speech. When citizens–especially those espousing unpopular viewpoints–are aware that the intimate details of their personal lives are pervasively monitored by government, or even that they could be singled out for discriminatory treatment by government officials as a result of their First Amendment expressive activities, they are less likely to freely express their dissident views.”
― John W. Whitehead, A Government Of Wolves: The Emerging American Police State
tags: american-society, constitution, constitutional-rights, first-amendment, fourth-amendment, free-speech, freedom, liberty, privacy, surveillance, surveillance-society
8 likes
Like

“A nation of sheep will "beget a government of wolves." – EDWARD R. MURROW CBS BROADCAST JOURNALIST 1908-1965”
― John W. Whitehead, A Government of Wolves: The Emerging American Police State
2 likes
Like