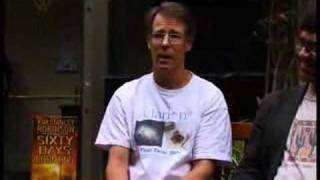 Website
https://www.sfsite.com/fsf/
Genre
Fantasy, Science Fiction
edit data
Gordon Van Gelder (born 1966) is an American science fiction editor. From 1997 until 2014, Van Gelder was editor and later publisher of The Magazine of Fantasy & Science Fiction, for which he has twice won the Hugo Award for Best Editor Short Form. He was also a managing editor of The New York Review of Science Fiction from 1988 to 1993, for which he was nominated for the Hugo Award a number of times. As of January 2015, Van Gelder has stepped down as editor of Fantasy & Science Fiction in favour of Charles Coleman Finlay, but remains publisher of the magazine.

“Despite Imbry's demurrals, Ghyll never missed an opportunity to expound on his creed, and was now again launched upon a lecture. "Life, after all," he said, "is but a succession of greater and lesser probabilities—a melange of maybes, as the Grand Prognosticator so aptly put it. Look at you, here in the supposed security of Bolly's Snug, supping and swilling with nary a care. Yet can you deny that a fragment of some asteroid, shattered in a collision far out in thither space back when humankind was still adrip with the primordial slime, having spent millions of years looming toward us, might now, its moment come, lance down through the atmosphere at immense speed and obliterate you where you stand?" "I do not deny the possibility," said Imbry. "I say that the likelihood is remote." "Yet still it exists! And if we couple that existence to a divine appetite for upsetting mortal plans—" "I can think of other, less far-fetched scenarios that might lead to the obliteration of someone in this room," said the thief. He accompanied the remark with an unwinking stare that ought to have caused Ghyll to stop to consider that, though Imbry was so corpulent as to be almost spherical, he was capable of sudden and conclusive acts of violence. And that consideration would have led, in turn, to a change of subject. But the Computant was too deeply set in his philosophy to take note of how others responded to it, and continued to discourse on abstruse concerns.”
― Gordon Van Gelder, Fantasy & Science Fiction, November/December 2011
1 likes
Like

“May I ask," I asks, asking, "what you are trying to do with your time traveling and what you do when you have traveled time? Your motives are obscure, your methods abstruse, your results intangible.”
― Gordon Van Gelder, The Magazine of Fantasy & Science Fiction, March/April 2015
0 likes
Like

Is this you? Let us know. If not, help out and invite Gordon to Goodreads.