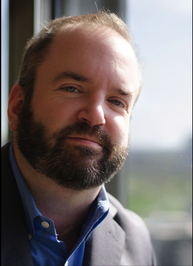 Born
in Springfield, Missouri, The United States
Twitter
wileylaw2
Genre
Thriller, Suspense, Mystery
Influences
Raymond Chandler, Hunter S. Thompson, Elmore Leonard
Member Since
May 2012
edit data
Dale Wiley is a Missouri attorney who has had a character named after him on CSI, owned a record label, been interviewed by Bob Edwards on NPR's Morning Edition and made motorcycles for Merle Haggard and John Paul DeJoria. He has three awesome kids and spends his days working as a lawyer fighting the big banks.

I've written all kinds of different things, from newspaper articles to books to even a history of The Muny in St. Louis when they turned 75. It's interesting to see when people make a point of reminding you of something you wrote that meant something to them. If you can continue to be vital to someone else's life, long after the fact, that's extraordinary.(less)
flag
See all 5 answers from Dale Wiley…

“marked New Carrolton just about to close its doors, and did another jump-roll between them, once again - you guessed it - landing on the same shoulder. It felt as if it were attached to my body by two painful threads, and it pulsed like the rhythm track at a nightclub. I was sitting on the floor, wincing and making very awful, howl-and-screech-type noises, all of which would have drawn considerable attention in many other venues. However, this was the Washington, DC subway. Several people stared, but not for long. They averted their eyes as I rose and looked around, all dreadfully afraid that I might do something to them. Did I mention that my shoulder hurt like hell? If I didn't, then I should, and even if I did, I should probably emphasize it. Because it was practically all I could think of. I could just feel the blood rushing into it, but I didn't want to examine it, for fear that I might”
― Dale Wiley, The Intern
0 likes
Like

“Almost everything in Washington is big and gray and ugly. I'm talking about buildings here, but a good number of the residents would also fall into the same category. The architects decided to make everything look Roman and Greek, which might be all right if you were in Rome or Athens, but all it ended up doing in DC was making the main part of the city look like a bunch of poorly-decorated wedding cakes. They built the kinds of buildings which could be loved by the old and feared by the young, daring anyone idealistic to try and change a thing. Every day I saw the same congregation of tourists gawk and dawdle in front of those buildings as if they expected them to move, or change colors, or do”
― Dale Wiley, The Intern
0 likes
Like

“If you're not an annoyance on the internet, then you're doing something wrong.”
― M LeMont, How To Gain 100,000 Twitter Followers: Twitter Secrets Revealed by An Expert
0 likes
Like

Dale Wiley
author of
The Intern