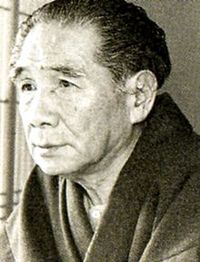 “Ginzo inclined his head and, without uttering a single word, returned to his room in the main house. For a while he just stood there thinking, but eventually he uttered a single sentence: “That man’s lying.” With that, he opened his suitcase and took out a blank telegram. After a few moments, he began to write. KATSUKO DEAD. SEND KINDAICHI. He addressed it to his own wife, then set out for the K—town post office.”
― Seishi Yokomizo, The Honjin Murders
2 likes
Like

“There was the whole collection of Arthur Conan Doyle, Maurice Leblanc’s Lupin series, and every translated work that the publishers Hakubunkan and Heibonsha had ever released. Then there was the Japanese section: it began with nineteenth-century novels by Ruiko Kuroiwa, and also featured Edogawa Ranpo, Fuboku Kozakai, Saburo Koga, Udaru Oshita, Takataro Kigi, Juza Unno, Mushitaro Oguri all crammed in together. And then as well as Japanese translations of Western novels, there were the original, untranslated works of Ellery Queen, Dickson Carr, Freeman Wills Crofts and Agatha Christie, etc. etc. etc. It was a magnificent sight: an entire library of detective novels.”
― Seishi Yokomizo, The Honjin Murders
1 likes
Like