,
Discover new books on Goodreads
See if your friends have read any of Amity Gaige's books 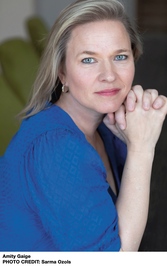 · 16,235 ratings · 2,364 reviews · 11 distinct works • Similar authors
More books by Amity Gaige…
Quotes by Amity Gaige  (?)
Quotes are added by the Goodreads community and are not verified by Goodreads. (Learn more)
“Be happy. Decide to be happy. If you want to be happy, be happy! No one cares if you're happy or not, so why wait for permission? And did it really matter if you had been deeply unhappy in your past? Who but you remembered that?”
― Amity Gaige, Schroder
tags: happiness
10 likes
Like

“Until I sailed, I never would have known that children could be so brave. Which is not to say they did not whine at sea, that they did not cry at the worst times, or need their crusts cut just so, but as it turned out, they had a deep capacity for witness. In a way that I could not, they became the sea, they became the swamp. Their experience was total, without footnote. That day in the swamp, I felt unaccountably happy for them, and for myself as a child, because I knew that I must have been that way once too. I remembered the loss of childhood too well. But I often forgot the long years it was mine.”
― Amity Gaige, Sea Wife
1 likes
Like

This month, we are reading from the New York Times 100 Notable Books of 2013 list. The 100-book-list has been narrowed down to the list below for voting.

Since these books are not from the same genres, I have included genre as well as a link to the New York Times reviews.

Is this you? Let us know. If not, help out and invite Amity to Goodreads.