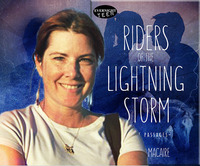 Website
https://authorjennifermacaire.wordpress.com/
Genre
Historical Fiction, Science Fiction, Young Adult
Member Since
November 2012
edit data
Jennifer Macaire lives in France with her husband, three children, & various dogs & horses. She loves cooking, eating French chocolate, growing herbs and flowering plants on her balcony, and playing golf. She grew up in upstate New York, Samoa, and the Virgin Islands. She graduated from St. Peter and Paul high school in St. Thomas and moved to NYC where she modeled for five years for Elite. She went to France and met her husband at the polo club. All that is true. But she mostly likes to make up stories.

I got the jab!

Stef and I got our first shots of AstraZeneca against Covid. Stef had no ill-efects, but I woke up in …

The Time for Alexander (7 books)
by
Jennifer Macaire (Goodreads Author)

Jennifer Macaire is currently reading
Woman on the Edge of Time
by Marge Piercy
bookshelves: currently-reading

“Since the dawn of time, several billion human (or humanlike) beings have lived, each contributing a little genetic variability to the total human stock. Out of this vast number, the whole of our understanding of human prehistory is based on the remains, often exceedingly fragmentary, of perhaps five thousand individuals. You could fit it all into the back of a pickup truck if you didn't mind how much you jumbled everything up, Ian Tattersall, the bearded and friendly curator of anthropology at the American Museum of Natural History in New York, replied when I asked him the size of the total world archive of hominid and early human bones.
The shortage wouldn't be so bad if the bones were distributed evenly through time and space, but of course they are not. They appear randomly, often in the most tantalizing fashion. Homo erectus walked the Earth for well over a million years and inhabited territory from the Atlantic edge of Europe to the Pacific side of China, yet if you brought back to life every Homo erectus individual whose existence we can vouch for, they wouldn't fill a school bus. Homo habilis consists of even less: just two partial skeletons and a number of isolated limb bones. Something as short-lived as our own civilization would almost certainly not be known from the fossil record at all.
In Europe, Tattersall offers by way of illustration, you've got hominid skulls in Georgia dated to about 1.7 million years ago, but then you have a gap of almost a million years before the next remains turn up in Spain, right on the other side of the continent, and then you've got another 300,000-year gap before you get a Homo heidelbergensis in Germany and none of them looks terribly much like any of the others. He smiled. It's from these kinds of fragmentary pieces that you're trying to work out the histories of entire species. It's quite a tall order. We really have very little idea of the relationships between many ancient species which led to us and which were evolutionary dead ends. Some probably don't deserve to be regarded as separate species at all.”
― Bill Bryson, A Short History of Nearly Everything

Colin Cotterill
author of
The Coron...