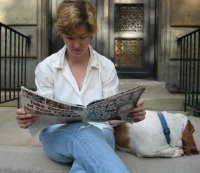 Born
New York City, The United States
Website
https://www.mariahfredericksbooks.com
Genre
Mystery, Historical Fiction
Member Since
February 2012
edit data
Mariah Fredericks is the author of several novels for teens. A Death of No Importance is her first mystery for adults. She lives with her husband and son in Jackson Heights, New York.

Death of a New American is out in paperback today. Usually when a book comes out, I head to the stores, snap pictures of it on the tables. (Make sure it is on the tables.) But today I can’t. Today I am in self-imposed quarantine. Many bookstores are closed. New York City is quiet. The markets have collapsed. People are losing their jobs and their savings. Promoting a book right now feels…myopic.

“I end up watching this movie about some girl who's supposed to be so smart and edgy and unpopular. She wears glasses, that's how you know she's so smart. And she's the only one that has dark hair in the school- a place that looks like Planet Blond.

Anyway, she somehow ends up going to the prom- hello, gag- and she doesn't wear her glasses, so suddenly she's all beautiful. And she's bashful and shy because she doesn't feel comfortable wearing a dress. But then the guy says something like, "Wow, I never knew you were so pretty," and she feels on top of the world.

So, basically, the whole point is she's pretty. Oh, and smart, too. But what's really important here is that she's pretty.

For a second I think about Katie. About her thin little Clarissa Le Fey.

It must be a pain being fat. There are NO fat people on Planet Blond.

I don't get it. I mean, even movies where the actress is smart- like they seem like they'd be smart in real life, they're all gorgeous. And they usually get a boyfriend somewhere in the story. Even if they say they don't want one. They always, always end up falling in love, and you're supposed to be like, "Oh, good."

I once said this to my mom, and she laughed. "Honey, Hollywood... reality- two different universes. Don't make yourself crazy."

Which made me feel pretty pathetic. Like I didn't know the difference between a movie and the real world.

But then when everyone gets on you about your hair and your clothes and your this and your that, and "Are you fat?" and "Are you sexy?" you start thinking, Hey, maybe I'm not the only one who can't tell the difference between movies and reality.

Because, you know, otherwise you might not get to go to the prom and fall in love.”
― Mariah Fredericks, Head Games
tags: beauty, head-games, judith-ellis, mariah-fredericks
31 likes
Like

“My dad said to me a few years ago: "There's no harm in thinking." We were talking about Crazy Uncle Albert and whether it was right to use your brain to build weapons.

He said, "You can't expect people not to think. Not to know things just because they COULD be bad."

I said, "Yeah, but then they built it and a hundred thousand people died."

My dad laughed and said there were a lot of steps between the thinking and the doing.

Which I know, duh. All I was saying is that when you think of doing something, you don't always know the consequences. For a while people THOUGHT about building the bomb, but nothing happened. In the end it was a lot of different people doing a lot of different things, most of which had nothing to do with the bomb, that did make it happen.

I think about that sometimes. Who was the person who had the first thought, the one that started it all?

And after they had the thought, what was the first thing they did?

I know my uncle never thought, Hey, all this great science- one day I'll use it to kill a whole bunch of people. You just look at his picture; he's not that kind of person.

And yet, I guess in a way he sort of is.”
― Mariah Fredericks, Head Games
tags: albert-einstein, head-games, judith-ellis, mariah-fredericks, thinking
9 likes
Like

“Just for once, I want someone to want me more than anybody else. To put me first.”
― Mariah Fredericks, The Girl in the Park
tags: love
7 likes
Like