,
Discover new books on Goodreads
See if your friends have read any of Walter Kempowski's books 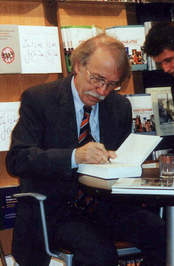 4.15 avg rating — 522 ratings
Quotes by Walter Kempowski  (?)
Quotes are added by the Goodreads community and are not verified by Goodreads. (Learn more)
“They told us to take anything we wanted, be we were so delighted to be free, nothing else seemed to be of any value.”
― Walter Kempowski, Swansong 1945: A Collective Diary of the Last Days of the Third Reich
2 likes
Like

“As always when he went abroad, Jonathan regarded the German passport officers with a degree of wistfulness. Soon he would be placing himself under foreign sovereignty, a guest; he would have to hold his tongue instead of being allowed to demonstrate his superiority. When you'd started a world war, murdered Jews and taken people's bicycles away (in Holland) the cards were stacked against you.”
― Walter Kempowski, Marrow and Bone
0 likes
Like

“Perhaps that was the day when the bombed synagogue opened again. Or the one when I went to a cobbler who was repairing shoes with the leather from stolen Torah rolls. "I didn't know it was sacred leather," he said. We collected all the pieces together, and he refused the money that I tried to give him for a few ladies' shoes with Hebrew letters written in ancient ink on the soles.”
― Walter Kempowski, Swansong 1945: A Collective Diary of the Last Days of the Third Reich
0 likes
Like

Remember, if you vote for a book and it wins, you are implicitly promising to read the book and participate in the discussion (or else, to use my grandfather's favourite unspecified threat, you may be spiflicated!)

The poll will be open through March 1st. (Note: You can change your vote at any time prior to the closing of the poll.) Discussion will begin on April 1st