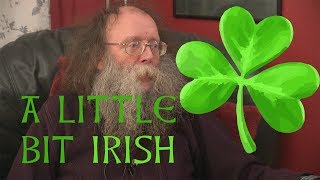 “And he got going from there to America. Worked his passage, I s'pose, like a lot more. And I heard he did well in America, too. Got married there. Had a family. But never came back. And you know why? 'Cause if he did, if he ever set foot in Ireland again, you know who'd be waiting for him, don't you?

That's right. The three of 'em. And their box. And the second time they'd make no mistake.

It is a much-overlooked fact that not all of the thousands who fled Ireland in former times did so to escape hunger, deprivation, and persecution. There were also those who went to escape the wrath of the Good People. Many stories illustrated this, the one here being typical.”
― Eddie Lenihan, Meeting the Other Crowd
tags: faery, fairies, ireland
4 likes
Like

“Who're them?" says he to the curate.
"Them are the fallen angels," says the curate.
They had a human form, no wings. God took the wings off of 'em after Lucifer rebelled - that way they couldn't go back, d'you see. They had no wings. But there was so many of 'em that you couldn't drive a knife down between 'em. They were as thick as hair on a dog's back. They were the finest people he ever seen. And whatever way he looked at 'em, some o' the finest girls he ever seen was in it, he said. They had to be good-looking, you know! 'Twas the sin o' pride put Lucifer down, d'you see. The best-looking angel in Heaven, 'twas the sin o' pride put him down. I s'pose they were nearly all as good-looking.”
― Eddie Lenihan, Meeting the Other Crowd
tags: angels, eire, faery, fairies, fallen-angels, ireland
3 likes
Like

“There'll be no more music, Father. But there'll be this!" He stepped into the dark, picked up the knife, and held it under their noses.

"Go home. Tell your people what you saw and heard here tonight. And tell 'em that anyone we catch on these roads after dark anymore... this is what they'll get. Now that I know we're never to see the face o' God, we have nothing to lose. So, make sure you have your message right, Father, 'cause there'll be no other warning.”
― Eddie Lenihan
tags: after-dark, faery, fairy, knife, music, warning
3 likes
Like

Is this you? Let us know. If not, help out and invite Eddie to Goodreads.