Discover new books on Goodreads
See if your friends have read any of John D. Rockefeller's books 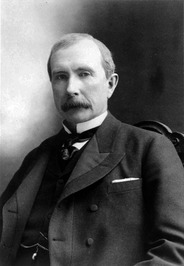 Born
in Richford, New York, The United States
July 08, 1839
Died
May 23, 1937
edit data
John Davison Rockefeller Sr. was an American industrialist and philanthropist. He was, in 1870, one of the founders of the Standard Oil Company, which became the first great U.S. business trust. He was the driving force of this business until his retirement in 1897, and became the richest man in the world.

Rockefeller Sr. was also a very important philanthropist, founder of both the University of Chicago and Rockefeller University and funder of the Central Philippine University in the Philippines. Beside this he was responsable for the creation of foundations that had a major effect on medicine, education and scientific research.

Rockefeller Sr. was also a very important philanthropist, founder of both the University of Chicago and Rockefeller University and funder of the Central Philippine University in the Philippines. Beside this he was responsable for the creation of foundations that had a major effect on medicine, education and scientific research.

He was the father of John Davison Rockefeller Jr. ...more

“I believe in the supreme worth of the individual and in his right to life, liberty and the pursuit of happiness.

I believe that every right implies a responsibility; every opportunity, an obligation; every possession, a duty.

I believe that the law was made for man and not man for the law; that government is the servant of the people and not their master.

I believe in the dignity of labor, whether with head or hand; that the world owes no man a living but that it owes every man an opportunity to make a living.

I believe that thrift is essential to well-ordered living and that economy is a prime requisite of a sound financial structure, whether in government, business or personal affairs.

I believe that truth and justice are fundamental to an enduring social order.

I believe in the sacredness of a promise, that a man's word should be as good as his bond, that character—not wealth or power or position—is of supreme worth.

I believe that the rendering of useful service is the common duty of mankind and that only in the purifying fire of sacrifice is the dross of selfishness consumed and the greatness of the human soul set free.

I believe in an all-wise and all-loving God, named by whatever name, and that the individual's highest fulfillment, greatest happiness and widest usefulness are to be found in living in harmony with His will.

I believe that love is the greatest thing in the world; that it alone can overcome hate; that right can and will triumph over might.”
― John D. Rockefeller
103 likes
Like

“Don't be afraid to give up the good to go for the great.”
― John D. Rockefeller
tags: john, rockefeller, success
98 likes
Like