Discover new books on Goodreads
See if your friends have read any of Harry G. Frankfurt's books 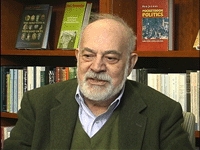 Born
in Langhorne, Pennsylvania, The United States
May 29, 1929
Website
https://scholar.princeton.edu/fraharg/home
Genre
Philosophy
edit data
Harry Gordon Frankfurt, Ph.D. (Philosophy, Johns Hopkins University, 1954; M.A., Johns Hopkins, 1953; B.A., Johns Hopkins, 1949), is Professor of Philosophy Emeritus at Princeton University. He previously served as chair of the philosophy department at Yale University, 1978–1987, where he was also a lecturer in the School of Law, 1981–89. He is a Fellow of the American Academy of Arts and Sciences.

“The contemporary proliferation of bullshit also has deeper sources, in various forms of skepticism which deny that we can have any reliable access to an objective reality and which therefore reject the possibility of knowing how things truly are. These "anti-realist" doctrines undermine confidence in the value of disinterested efforts to determine what is true and what is false, and even in the intelligibility of the notion of objective inquiry. One response to this loss of confidence has been a retreat from the discipline required by dedication to the ideal of correctness to a quite different sort of discipline, which is imposed by pursuit of an alternative ideal of sincerity. Rather than seeking primarily to arrive at accurate representations of a common world, the individual turns toward trying to provide honest representations of himself. Convinced that reality has no inherent nature, which he might hope to identify as the truth about things, he devotes himself to being true to his own nature. It is as though he decides that since it makes no sense to try to be true to the facts, he must therefore try instead to be true to himself.

But it is preposterous to imagine that we ourselves are determinate, and hence susceptible both to correct and to incorrect descriptions, while supposing that the ascription of determinacy to anything else has been exposed as a mistake. As conscious beings, we exist only in response to other things, and we cannot know ourselves at all without knowing them. Moreover, there is nothing in theory, and certainly nothing in experience, to support the extraordinary judgment that it is the truth about himself that is the easiest for a person to know. Facts about ourselves are not peculiarly solid and resistant to skeptical dissolution. Our natures are, indeed, elusively insubstantial -- notoriously less stable and less inherent than the natures of other things. And insofar as this is the case, sincerity itself is bullshit.”
― Harry G. Frankfurt, On Bullshit
tags: bullshit, honesty, philosophy, reality, sincerity, truth
191 likes
Like

“It is impossible for someone to lie unless he thinks he knows the truth. Producing bullshit requires no such conviction.”
― Harry G. Frankfurt, On Bullshit
57 likes
Like

“Bullshit is unavoidable whenever circumstance require someone to talk without knowing what he is talking about.”
― Harry G. Frankfurt, On Bullshit
45 likes
Like

Is this you? Let us know. If not, help out and invite Harry to Goodreads.