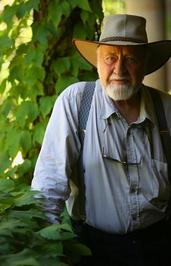 
Bill Mollison had been vitally concerned with the environment for over 40 years. His many roles included: scientist, naturalist and University professor. Later he became a vigorous campaigner against environmental exploitation which lead him to develop Permaculture as a positive solution.

Bill had devoted his energies towards designing sustainable systems, writing books and articles on Permaculture, and most importantly teaching.

“Though the problems of the world are increasingly complex,
the solutions remain embarrassingly simple.”
― Bill Mollison
36 likes
Like

“The greatest change we need to make is from consumption to production, even if on a small scale, in our own gardens. If only 10% of us do this, there is enough for everyone. Hence the futility of revolutionaries who have no gardens, who depend on the very system they attack, and who produce words and bullets, not food and shelter.”
― Bill Mollison
tags: consumption, gardens, revolution, revolutionaries
34 likes
Like

“. . . every society that grows extensive lawns could produce all its food on the same area, using the same resources, and . . . world famine could be totally relieved if we devoted the same resources of lawn culture to food culture in poor areas. These facts are before us. Thus, we can look at lawns, like double garages and large guard dogs, [and Humvees and SUVs] as a badge of willful waste, conspicuous consumption, and lack of care for the earth or its people.

Most lawns are purely cosmetic in function. Thus, affluent societies have, all unnoticed, developed an agriculture which produces a polluted waste product, in the presence of famine and erosion elsewhere, and the threat of water shortages at home.

It is past time to tax lawns (or any wasteful consumption), and to devote that tax to third world relief. I would suggest a tax of $5 per square metre for both public and private lawns, updated annually, until all but useful lawns are eliminated.”
― Bill Mollison
tags: famine, food, peak-oil, permaculture, postcarbon
21 likes
Like