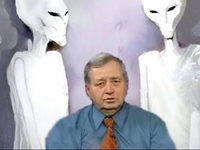 When Charles and Marie had been married about three months, Charles decided to risk telling her about the extraterrestrials he had encountered at Indian Springs. Marie wasn't terribly interested in whether or not ETs existed. She only said that if she met one, she hoped she would behave properly. That might just be another way to describe the current buzzword, 'Exopolitics'.

Raising a family pushed memories of the terror and unprecedented experiences on the Indian Springs gunnery ranges into the background, but they couldn't be forgotten. In his spare time, Charles began writing his memoirs for his children and grandchildren. Eighteen years later, when Marie discovered what he had been doing, she convinced him to publish them. She found it easy to come up with a title, cover design and helped edit what eventually became the Millennial Hospitality series, which is now four books. Marie particularly liked Charles' memoirs because they did not attempt to prove the existence of extraterrestrials, but rather, could be read and enjoyed by anyone. They read like a novel and the reader can learn about how to be a better human being. Because of the nature of the material, and to protect the innocent, it seemed prudent to change the names of friends, places, a few distances and directions. The Millennial Hospitality series is without precedent, a truly groundbreaking account of one man's actual experiences with extraterrestrials in the Nevada desert. It is already being hailed as a classic. ...more

“Yet, emotionally I could not bring myself to accept either his presence, or his reality. My problem was not a religious problem. God could certainly create as many variations of intelligent humans as he wanted. Presumably God put humans here on this earth, and all non-humans on some other far-away planet orbiting some other far-away star. My problem was a scientific problem. For the Tall White guard to be standing there in the hot sun, for real, would mean that everything I had been taught about Einstein and the Theory of Relativity was simply incorrect.”
― Charles James Hall, Millennial Hospitality IV: After Hours
1 likes
Like

“Maybe she’s right,” I reasoned. “Maybe I shouldn’t worry so much about taking accurate readings. Maybe I should spend more time just relaxing, and looking calmly at the world around me. Maybe that would help me get well again.”
― Charles James Hall, Millennial Hospitality IV: After Hours
0 likes
Like


Is this you? Let us know. If not, help out and invite Charles to Goodreads.